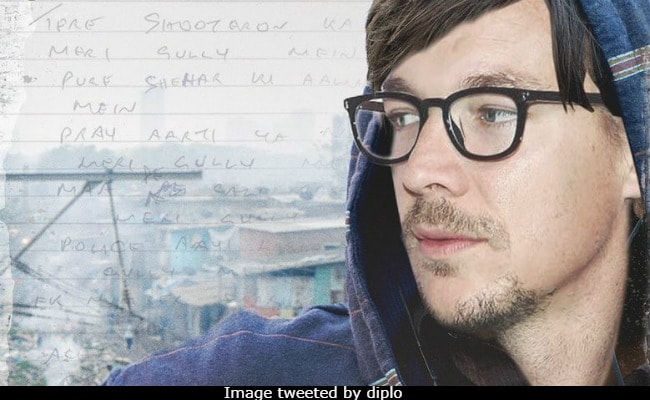 Looks the beats of Alia Bhatt and Ranveer Singh's Gully Boy's rap have hit the shores abroad and for all the good reasons. Internationally reputed DJ Diplo gave a major shout out to Ranveer Singh and his film as he out a tweet addressed to the Gully Boy. In a recent tweet, he wrote: "Mera time bhi ayega" with the tag #GullyBoy. He also superimposed a photo of himself on a poster of the movie, originally featuring Ranveer Singh. "Random white guy," reads text on the photo. Ranveer responded to Diplo's tweet with a cheeky reply: "Ooo, ek number, lala!" LOL. That's so Ranveer Singh.

Meanwhile, Twitter can't believe Diplo actually composed a tweet for Ranveer Singh's Gully Boy and posted reactions such as: "Wow the hype for Gully Boy is real" and "Ranveer magic at international level."

Ranveer is a legend period.

Directed by Zoya Akhtar, Gully Boy has already generated much noise because of the film's subject and storyline. It tracks the life and struggles of an aspiring rapper - the titular Gully Boy - who becomes a popular name in Indian rap music with his verse and lyrics inspired by the essence of Mumbai slums, where he hails from. In interviews, Zoya Akhtar has said that Gully Boy is largely inspired by the lives of Indian rappers Divine and Neazy, who also contributed to the film's rap tracks.

Meanwhile, Diplo is familiar with the Bollywood territory. In 2017, he collaborated with Shah Rukh Khan for the song Phurrr from Jab Harry Met Sejal. Shah Rukh and his family also hosted the American DJ at his Mumbai residence later.

Walked into the video @diplo is making for Phurrr! Got a starring role in it & his Decent jacket. Wes u r dope! Thx pic.twitter.com/1DLxfcAP3n

Gully Boy is all set to hit screens on February 14.