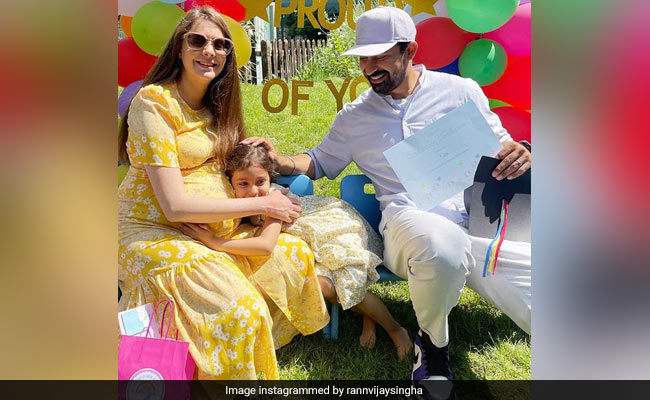 Congratulations, Rannvijay Singha and Prianka Singha. The couple welcomed their second child together, a baby boy. On Monday night, the actor shared a picture of little jersey with a pair of tiny sneakers and added a football emoji. "#satnamwaheguru," he captioned the post. VJ Nikhil Chinapa commented: "Congratulations guys! Sending you all our love for Kai's little brother and the new addition to your lovely family." Neha Dhupia, who has worked with Rannvijay in Action Replayy and Roadies, wrote: "Yayyy! Best news ever. Congratulations Rann, Pri and Kai." Prince Narula dropped heart emojis in the comments. Gauahar Khan wrote "congratulations." Kishwer Merchantt, Mahhi Vij, Varun Sood and other TV stars also congratulated the couple.

The couple announced their pregnancy in March this year.  Posting a picture with his wife Prianka and daughter Kainaat, the actor captioned the adorable picture: "Missing the three of you so much." This is the post we are talking about:

Rannvijay Singha  is best-known for hosting television reality show MTV Roadies. He made his Bollywood debut with the 2009 film Toss: A Flip of Destiny. He also featured in Bollywood films such as London Dreams, Action Replayy and 3 AM. Rannvijay Singha is seen hosting television reality show Splitsvilla 13 alongside Sunny Leone. Last year, the actor featured in Zee5's web-series Forbidden Love. He also starred in Netflix's Mismatched, starring arring Prajakta Koli and Rohit Saraf in the lead roles.