Rangoon Trailer: 'Thank You For The Response,' Says Shahid Kapoor 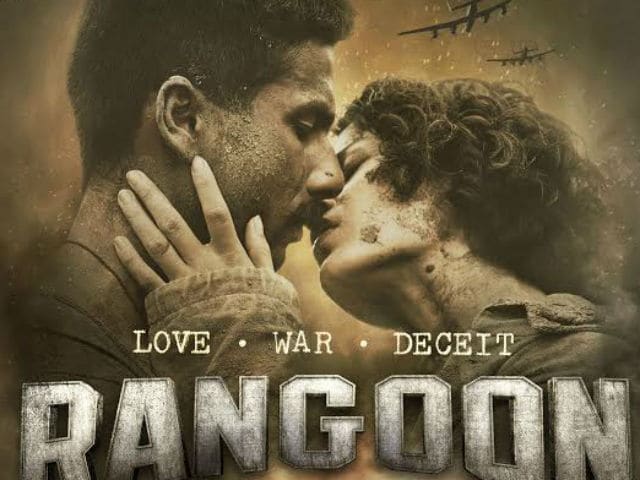 Rangoon is a period drama set during World War II

New Delhi: Actor Shahid Kapoor, who is all set to star in Vishal Bhardwaj's Rangoon said that he was a bit 'nervous' about the film. The film's trailer was unveiled on Friday, and has received a good feedback so far. Rangoon also stars Kangana Ranaut and Saif Ali Khan in pivotal roles. The trailer of the war drama has till now received above 9 million views. Shahid thanked the audiences' for the 'overwhelming' response and said: "Thank you thank you thank you guys. Was rather nervous about this one. The response has been tremendous. Big big love to you all." Rangoon will release on February 24.

The war romance drama is set in the 1940s amidst the turmoil of India's independence struggle. The trailer starts with war snippets. Kangana Ranaut is introduced as Miss Julia and Saif Ali Khan plays her mentor while Shahid Kapoor features as Nawab Malik, a soldier.

Watch the trailer of Rangoon here:

The first look of Rangoon was shared by Shahid, 36, a day ahead of the trailer release. Since that day, the film managed to grab everyone's attention.

Gear up for war! Bombarding you with the first look of Rangoon. @rangoonthefilm@viacom18movies@NGEMovies@WardaNadiadwalapic.twitter.com/U5laLgkUXc

In December 2015, Shahid had shared his look from Rangoon. The picture showed him dressed in a uniform with a moustache.

Now that it's out I guess I can post it #rangoon

Promoted
Listen to the latest songs, only on JioSaavn.com
Rangoon is Shahid's third film with Vishal Bhardwaj. The duo teamed up first for Kaminey in 2009 and then for 2014s Haiderwhile Vishal collaborated with Saif for the 2006 film Omkara. The film has extensively been shot in Arunachal Pradesh.

Meanwhile, Vishal Bhardwaj shared his experience of making Rangoon and told news agency PTI: "I am very happy with what we have achieved while shooting Rangoon. This film is very close to my heart and I want to make sure that this is seen as my best work ever."