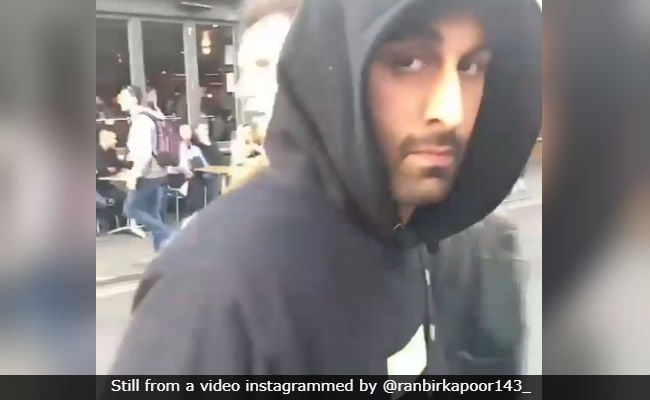 "When I got snubbed by a star," Karan Johar captioned a video of Ranbir Kapoor fake-snubbing him in Bulgaria, where they are currently making Brahmastra. In the video shared by Karan Johar on his Instagram story, which in turn has been lifted by fan clubs, Karan Johar calls after Ranbir Kapoor, who turns around and give him an angry look (did you just hide that grin, Ranbir) and then slaps off his camera. The video will make you LOL primarily because of Ranbir's expressions, which give away the prank. Ranbir has earlier starred in Yeh Jawaani Hai Deewani and Wake Up Sid produced by Karan Johar while the filmmaker directed him in Ae Dil Hai Mushkil.

Like mentioned earlier, team Brahmastra is currently filming in Bulgaria but actress Alia Bhatt, who is paired opposite Ranbir in the trilogy, recently returned to Mumbai in time to attend her best friend Akansha Ranjan's birthday party. Here are pictures of Alia Bhatt arriving at Akansha's birthday party in Mumbai. Meanwhile, Brahmastra is a trilogy directed by Ayan Mukerji. The film also features Amitabh Bachchan, Mouni Roy, Dimple Kapadia and Akkineni Nagarjuna. The first part of Brahmastra is expected to release in 2019.

Ranbir Kapoor, who was last seen in Sanju has also signed up for Yash Raj Films' Shamshera. Alia Bhatt has an interesting line-up of films - she will be seen opposite Ranveer Singh in Gully Boy next year and she is simultaneously filming Kalank, also produced by Karan Johar. Alia Bhatt has also signed up for Takht, which will be directed Karan Johar and also star Ranveer Singh, Kareena Kapoor, Vicky Kaushal, Janhvi Kapoor and Bhumi Pednekar.