In most of Alia Bhatt's posts Ranbir Kapoor is usually the photographer but this one is different. Here's why! 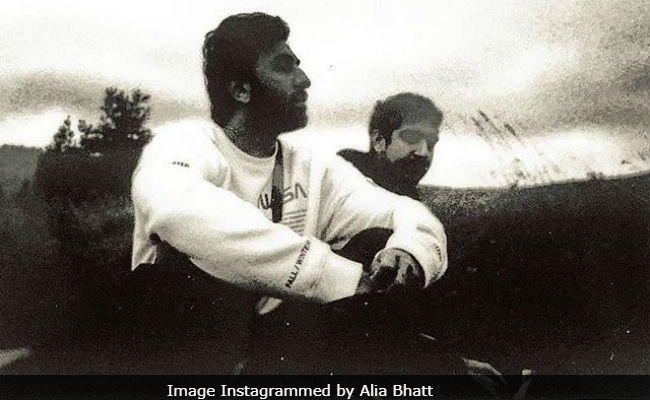 Ranbir Kapoor is usually the photographer in most of Alia Bhatt's Instagram posts but Alia's latest Instagram is an exception. Why you ask? Well, because this time it was Alia's turn to turn photographer for her Brahmastra co-star and rumoured boyfriend Ranbir. Alia, who recently wrapped the Bulgaria schedule of Brahmastra, shared a greyscale postcard-worthy picture of Ranbir along with Brahmastra director Ayan Mukerji from Sofia on Monday. The picture garnered lots of love from the actress' fans and over 6 lakh likes on Instagram. Alia also shared a picture of herself from Sofia and we are guessing the photograph was taken by her "amaze photographer" Ranbir Kapoor.

Alia's Instagram posts are often accompanied by an image courtesy that reads: "RK"(Ranbir Kapoor). Last week Alia shared a picture from the sets of Brahmastra and wrote: "Keep your eyes lifted high upon the sun, and you'll see the best light in everyone." The photo credit went to (no points for guessing) "RK."

keep your eyes lifted high upon the sun, & you'll see the best light in everyone.. RK

Here are some more pictures of Alia Bhatt, which were clicked by Ranbir Kapoor.

Ranbir Kapoor might not have an official account on Instagram but thanks to Alia, who keeps her Instafam updated by sharing the actor's pictures on her profile. Remember Alia's "The one with all the joy" post? Or the one where the trio could be seen playing with coloured balloons, which Alia captioned: "It means no worries, for the rest of your days...Hakuna Matata."

During the shooting ofBrahmastra in Bulagria, Alia, Ranbir and Ayan even met President Ram Nath Kovind. Pictures from Ram Nath Kovind's visit to the film's set in Sofia were shared by the President's official Twitter account.

#PresidentKovind and President Radev dropped in at the studio in Sofia where the Hindi film Brahmastra is being made. The Presidents met the Indo-Bulgarian crew and chatted about cinema as a business and cultural link between the two countries pic.twitter.com/8ApZq1gEJA

Apart from Alia Bhatt and Ranbir Kapoor, Brahmastra also features Amitabh Bachchan, Mouni Roy, Dimple Kapadia and Akkineni Nagarjuna. Brahmastra has been produced by Karan Johar's Dharma Productions and the first part of the fiction trilogy is slated to release next year.