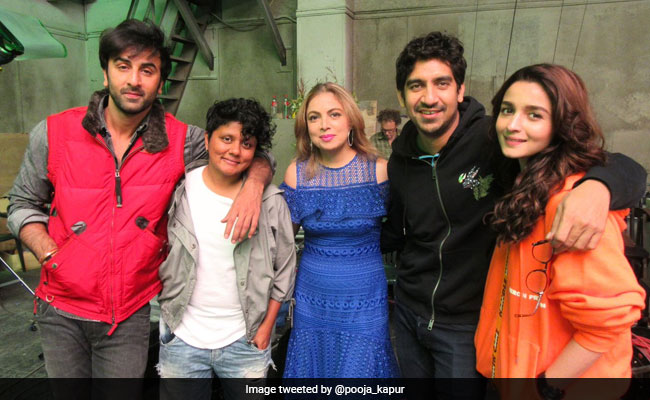 Ranbir Kapoor and Alia Bhatt have wrapped the Bulgaria schedule of Brahmastra recently. The duo posed for a photo with the film's director Ayan Mukerji and Pooja Kapur, Ambassador of India to Bulgaria, on what appears to be the last day of the Bulgaria schedule. Pooja Kapur shared the photo on Twitter and wrote: "Bidding adieu to the charming and talented cast and crew of Brahmastra. Bulgaria will miss you!" The cast of Brahmastra had been shooting in the picturesque country for quite some time. Alia Bhatt, Amitabh Bachchan and film's producer Karan Johar kept us updated with continual posts from the sets.

Bidding adieu to the charming and talented cast & crew of #Brahmastra. Bulgaria will miss you! #ranbirkapoor#ayanmukerji@aliaa08@MARIJKEdeSOUZA@karanjohar@indiandiplomatspic.twitter.com/ofvNCdOBmp

Previously, Indian President Ram Nath Kovind, who was on his three-nation visit to Europe, met the cast of Brahmastrain Bulgaria. Pictures from Ram Nath Kovind's visit to Brahmastra sets were shared by the President's official Twitter account. He was accompanied by wife Savita Kovind and President of Bulgaria Rumen Radev.

#PresidentKovind and President Radev dropped in at the studio in Sofia where the Hindi film Brahmastra is being made. The Presidents met the Indo-Bulgarian crew and chatted about cinema as a business and cultural link between the two countries pic.twitter.com/8ApZq1gEJA

Ayan Mukerji-directed Brahmastra is a three-part fantasy trilogy, which also stars Amitabh Bachchan, Nagarjuna, Dimple Kapadia and Mouni Roy. Brahmastra is expected to hit the screens in August next year.

Ranbir Kapoor and Alia Bhatt, who are sharing screen space for the first time in Brahmastra, often feature on the headlines foe their rumoured romance. However, the duo have not yet acknowledged their relationship yet.

Ranbir Kapoor was last seen in Rajkumar Hirani's blockbuster Sanju while Alia Bhatt, last seen in Raazi, garnered praises for her performance in the film by Meghna Gulzar.