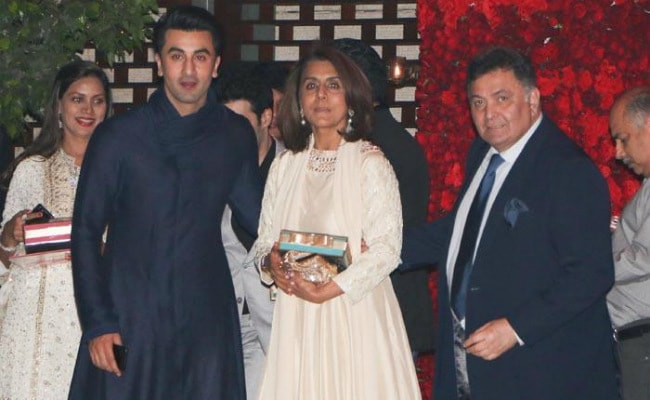 Ranbir and family at a party in Mumbai

Ranbir Kapoor is currently basking in the glory of the box office success of Sanju and for his father Rishi Kapoor, there just couldn't be a moment prouder than this! However, speaking to mid-day in a recent interview, Ranbir confessed that confronting Rishi Kapoor has never been his strongest game and how mom Neetu Kapoor acts as a mediator between the father-son duo. It's not hard to miss that Rishi Kapoor's reaction to Sanju, both before and after release, is in sharp contrast to how he dealt with Anurag Basu's Jagga Jasoos. He had launched a scathing attack on the director and marked him "irresponsible" for the film's delay, which eventually received a cold response at the box office.

After Rishi Kapoor's no-filter interviews about Anurag Basu, Ranbir never really reacted to his father's words but now, he told mid-day that while he "felt really bad for Dada (Mr Basu), confronting dad Rishi was not an option. "I have never looked my father in the eye. I always look down and speak to him. And only say, 'Yes!' So, it was very hard for me to confront him on these things. But I always pass on a harsh message through my mom. What do I do, I can't control him."

In May, an old interview of Neetu and Rishi Kapoor went crazy viral on social media, in which Neetu seemed to be seconding what Ranbir told mid-day. In the video, that was being shared on Instagram, Neetu described her son as: "He's totally down-to-earth, he's simple and he never loses his cool" whereas, for Rishi Kapoor, this is what Neetu had to say: "He's a brat. He's a bully and he's loud."

Promoted
Listen to the latest songs, only on JioSaavn.com
Glimpses of Ranbir's rapport with his father were offered every now and then during interviews for the promotions of Sanju. For example, after Rishi Kapoor couldn't stop gushing about Ranbir in Sanju, this is what Ranbir had told PTI: ""Besides being my father, he is also an actor I really admire and respect. He never tells me to my face that I've done good work, not that I expect it either. But when you hear such words coming from him, it is incredible, it really moved me, made me emotional."

"Cheers Ranbir! You don't know how proud your parents are. Thank you and god bless you. Aur bhi achcha kaam karo!" Rishi Kapoor tweeted after Sanju touched 100 crores. Even ahead of the film's release, Rishi Kapoor appeared spellbound as he witnessed Ranbir as Sanjay Dutt in the trailer. "Rajkumar Hirani has presented Ranbir is the biggest superb thing. The boy has really done well. I am so proud of him. I swear on Neetu and Ranbir, I did not think it was Ranbir, I thought it was Sanjay Dutt," he said in a statement. Later in the interview to mid-day, Ranbir also added: "When he likes something, he just overdoes it!"

I am flying and aircraft flying at 40,000 ft.Emirates flight EK702 Mauritius to Dubai now in real time. Cheers Ranbir! You don't know how proud your parents are. Thank you and God Bless you. Aur bhi achcha kaam karo! pic.twitter.com/CIt63wjxg1