"When roles are reversed," Neetu Kapoor captioned a photo of Rishi Kapoor and son Ranbir 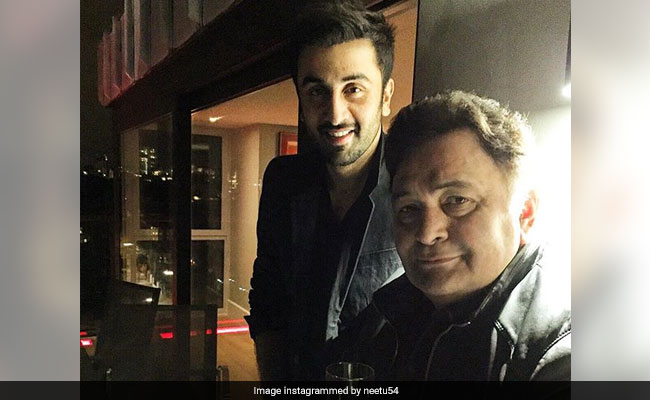 "When roles are reversed," Neetu Kapoor captioned a photo of Rishi Kapoor and son Ranbir, which will indeed melt your heart. The 63-year-old actor is currently in New York for treatment - while it was speculated that Mr Kapoor flew off to the Big Apple after being diagnosed with cancer, the reports were waived off by Randhir Kapoor last month. When in New York for treatment, Rishi Kapoor has constantly been accompanied by Neetu and Ranbir and the new photo is just a glimpse of that. Neetu Kapoor has also added hashtags such as "cycle of life", "gratitude" and "faith" to Ranbir and Rishi Kapoor's photo, which has been flooded with adorable comments from Riddhima Kapoor Sahni (Ranbir's sister), Abhishek Bachchan and others.

Earlier this month, Neetu Kapoor shared yet another photo of Ranbir and described him as her "strength." Ranbir Kapoor, who doesn't have a verified account on Instagram but is known to operate from an unknown profile, makes frequent appearances on Neetu Kapoor's feed.

Meanwhile in New York, Rishi Kapoor was recently visited by Ranbir's actress girlfriend Alia Bhatt, who has flown back to India now. Photos of Alia dining with Ranbir Kapoor and his family in the Big Apple have taken over the Internet. Previously, Rishi Kapoor has been visited by the likes of Priyanka Chopra, Sonali Bendre, Anupam Kher and Javed Akhtar in the city.

At the end of last month, Rishi Kapoor said he's taking a "leave of absence from work" for medical treatment with this tweet.

Later, he also explained why suddenly he sports grey hair, saying that's for a look in his upcoming movie.

This is to dispel all notions and wrong speculations of my hair turning grey/white overnight. My hair was dyed by Awan Contractor for a film produced by Honey Trehan and Sony pictures directed by Hitesh Bhatia. Film is untitled. Trust this clears the air pic.twitter.com/0v5Z0nFcDN

Rishi Kapoor was last seen in Mulk and Rajma Chawal is his next film. Sanju remains Ranbir Kapoor's last film. Brahmastra - his film with Alia Bhatt - releases next year.