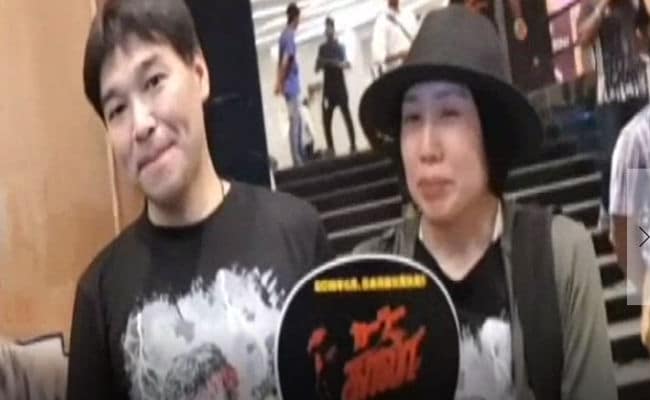 This couple travelled from Japan to catch the FDFS of Kaala in Chennai.

New Delhi: This Japanese couple just proved that they are Rajinikanth's #1 fans. The couple arrived from Osaka, Japan to catch the FDFS (that's 4 am in Chennai) of Rajinikanth's new film Kaala, which released today. The film releases in Osaka on June 10 but the couple wanted to watch Kaala on the first day of its release in Thalaiva's home town, they told NDTV. After all, they wanted to keep up with their tradition of watching Rajinikanth's films FDFS in Chennai - they've travelled to Chennai to watch Rajinikanth's previous films such as Kabali and Kochadaiiyaan too. Speaking in fluent Tamil, he told NDTV that the film is very special for him and his wife and hat they are excited about watching it in Chennai first, before in Osaka. Yesoda Hitadasi, who works as a Hotel Manager in Japan, added: "We like Rajini's style, action and humility." He went on to recite one of Rajinikanth's famous dialogues and a song, in style.

Kaala released amidst massive fanfare worldwide on Thursday morning. Fans of Rajinikanth rejoiced as theatres screened the superstar's new film. People queued up outside theatres, set off fireworks and danced to celebrate the release of Kaala. Enthusiastic fans, who watched the film FDFS, tweeted their verdict, saying Kaala is one of Rajinikanth's best films made.

Kaala is directed by Pa Ranjith and produced by Dhanush. In the film, Rajinikanth plays the role of Kaala Karikaalan, a local hero of Dharavi, who is a one man army against corrupt politicians. The film also stars Nana Patekar, Huma Qureshi and Eshwari Rao.
Comments
rajinikanth fanskaala rajinikanthjapanese couple at kaala