Rajinikanth's 2.0 Is The 8th Highest Opening Film Of 2018 In Hindi: Reports

As of now, Thugs of Hindostan, which opened on a promising note but tanked subsequently, registered the highest opening percentage in 2018 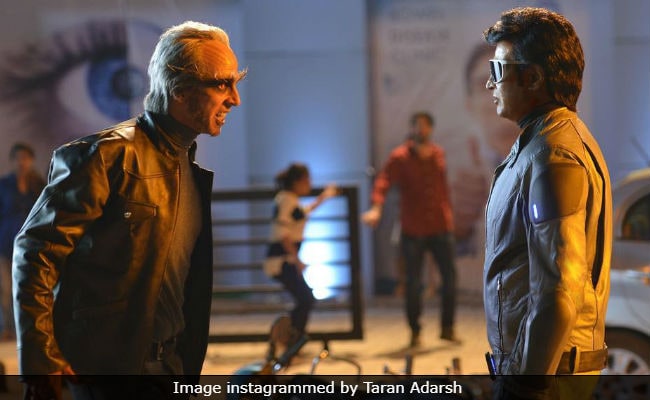 2.0, starring Rajinikanth and Akshay Kumar, took the eighth spot on the list of highest opening Hindi films of 2018, as per a report published in Box Office India. The S Shankar-directed film released across 4,000 screens and it registered 40 per cent occupancy in the early shows. The occupancy is "driven by single screens and mid-level multiplexes," according to Box Office India. As of now, Thugs of Hindostan, which opened on a promising note but tanked subsequently, registered the highest opening percentage - 65%. Baaghi 2, Sanju, Gold and Race 3 rounded off the list of top 5 highest openers.

However, another Box Office India report states that the aforementioned statistics are quite impressive considering it's a south Indian film dubbed in Hindi. Before 2.0, Humse Hai Muqabla (1995), Hindustani (1996) and Baahubali: The Conclusion (2017) registered successful first day figures. ICYDK, Humse Hai Muqabla and Hindustani are also directed by Shankar, which proves his films resonate with the audience.

2.0 is the sequel to 2010 blockbuster Enthiran and it opened to favourable reviews on Thursday worldwide in Tamil, Telugu and Hindi languages. Some film critics have panned the weak screenplay of 2.0 but so far, all critics unanimously agree that the film's VFX and special effects are exemplary. "It whizzes by thanks to the breathless action and the dazzling VFX. 2.0, however, would have been a far greater film had the screenplay dared to go beyond the known tricks of the genre," Saibal Chatterjee wrote in his review for NDTV. He gave the film 2-star rating.

2.0 was made on a budget of over Rs 500 crore, out of which the filmmakers have recovered Rs 370 crore through the digital rights and the satellite rights.