If you've not bought a ticket for Rajinikanth's 2.0 yet, we have five reasons why you should be queuing up outside the ticket window now 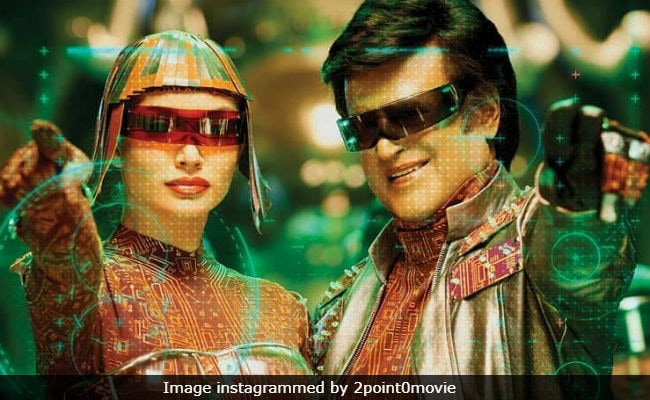 Rajinikanth and Amy Jackson in a still from 2.0. (Image courtesy: Instagram)

Rajinikanth's 2.0 finally releases today and fans of the megastar are all set to give Thalaiva's film a grand welcome. The actor commands a huge fan following and several cine-lovers travel to India from as a far as Japan and China to watch Rajinikanth's film FDFS. However, if you're not one of them, then read ahead and find five reasons why you should be queuing up outside the ticket window. The sequel to Enthiran (2010) was announced almost three years ago and the filmmakers are a little over a year late from the first proposed release date. As ardent fans of cinema, one should be excited about 2.0 finally opening in theatres. The special effects add to the interest while the dearth of successful big releases (especially the failure of Thugs Of Hindostan) compels us to welcome 2.0 with open arms.

So, if you've not bought a ticket for Rajinikanth's 2.0 yet, here are five reasons why you should:

#1 Enthiran Sequel: Shankar's Enthiran was a hit with fans and critics when it released in 2010. The film received positive reviews, which translated into fabulous box office numbers. The film's story (which has Frankenstein overtones) was appreciated by everyone and the action sequences very executed nicely. For 2.0 the filmmakers have sworn to surpass themselves. And going by the trailer, it seems they might just fulfil their promise. The critical and commercial success of Enthiran is promising enough to pull the audience to the movie theatres.

Also, as a team Shankar and Rajinikanth have never disappointed audience - before Enthiran, there was 2007 film Sivaji, which was also a box office gold mine.

#2 Rajinikanth vs Akshay: If you've seen the film's trailer then you know what we mean. Akshay Kumar plays the role of scary bird-like creature, who is hell-bent on punishing human beings for the use of cellphones which he thinks harm the environment. Rajinikanth as Chitti, the antagonist of Enthiran and the protagonist of 2.0, emerges as the hero everyone needs. The fight between these two technically enhanced individuals will be worth watching.

#3 The Special Effects: For 2.0, special effects are everything. The film's release date was rescheduled several times to achieve the desired results for the special effects. Over 15 VFX companies reportedly converged their talent pool to ensure highest standards of visual effects in 2.0. Aren't you curious to watch the film for its special effects alone?

#4 Rajinikanth's Second Film In 2018: How often do you get to see two Rajinikanth films in one year? The last time it happened was in 1995 when he was seen in Baashha, Aatank Hi Aatank and Muthu. 2.0 has been postponed several times and it is one of Rajinikanth's most-awaited films. Kaala released in June, and everyone's A-OK watching another Rajinikanth film this year.

#5 High Hopes On 2.0 After Thugs of Hindostan's Failure : Cine-goers had huge expectations from Thugs Of Hindostan, starring Aamir Khan and Amitabh Bachchan, but the film failed to impress the audience. It underperformed at the box office and the theatre owners were also unhappy with the outcome. Going by the promotional content of 2.0, this one promises to be the entertaining film we, the movie-goers, deserve. It should at least be worth the popcorn we buy at the snack bar.

Do you have another reason to watch 2.0? Tell us in the comments section below.