"But mujhe toh main bahut sahi lagti hun. Who are these people to tell me I'm not pretty?" said the actress 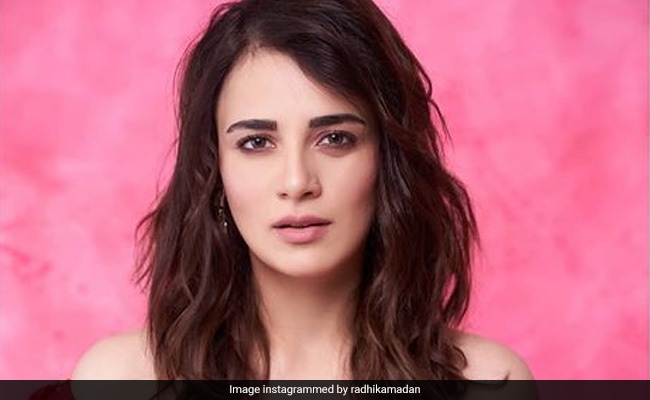 Radhika Madan, in her piece for Humans Of Bombay, revealed that she was told she "needed surgery" during her auditions for films. Radhika, who rose to popularity for playing the role of Ishaani Parikh in TV show Meri Aashiqui Tum Se Hi, switched to films with Vishal Bhardwaj's 2018 comedy drama Pataakha. Talking about the time when she started auditioning to venture into film industry, Radhika Madan said: "I was told I needed to have a particular shape and size, and that I needed surgery. But mujhe toh main bahut sahi lagti hun. Who are these people to tell me I'm not pretty?"

Radhika began her piece for HOB by sharing how she stepped into showbiz. "As a kid, I was happy in my own world doing my own thing; I was a queen. I was really mischievous and would sometimes even puncture tyres for fun! Growing up, I had a unibrow and hardly got attention from boys, but I didn't care; I felt I was pretty. And whenever anyone asked, 'What do you want to do when you grow up?' I'd say, 'Shaadi'! I loved the taamjham! But I became passionate about dancing and dreamt of going to Broadway. My parents were supportive. At 17, I auditioned for a TV show and within 3 days I was in Bombay, shooting. But it was tough. I barely got time to sleep, which led to me gaining a few kilos," she said.

The actress, who has worked in just one TV show, added: "Then, I heard rumours about me getting replaced and that pushed me to explore my limits. So, I began working out and lost myself to my character. And I realised, this is my high...this is what I want to do! I got more TV offers, but I told myself, 'You're only 19, if you choose comfort, you'll get stuck.' So, I quit TV to do films. I began auditioning, but I faced rejections. I was told I needed to have a particular shape and size, and that I needed surgery. But mujhe toh main bahut sahi lagti hun. Who are these people to tell me I'm not pretty?"

It wasn't easy for Radhika Madan to prove herself as an actor in Bollywood. "But for the next 1.5 years I didn't get work. It's easy to doubt yourself at such a Time, but I knew the journey is more important than the destination. So, I made an effort to enjoy my auditions! Soon, I signed my first film as other projects followed. I remember I'd gained 12 kgs for a role to look older, and I auditioned for a 17-year-old character, both in a month! But I had only one motto - just have fun! That audition turned out to be one of my best and I got the part!" she said.

The actress' debut film Pataakha was followed by Vasan Bala's 2019 film Mard Ko Dard Nahi Hota, in which Radhika played the lead role. Her next film Angrezi Medium was opposite late actor Irrfan Khan. The film released in 2020.

The key to Radhika Madan's success is that she "celebrates her imperfections." She said: "I think the key is to love yourself fiercely because what you see in yourself is what others see in you. If I'd been insecure, people would've fed on that fear. So, whether it's as a kid who didn't care about her unibrow or an adult who thinks her height is cute, I celebrated my imperfections. I know I don't have to fit someone else's definition of perfection-I'm imperfectly perfect and I love it!"

Radhika Madan was last seen in Netflix series Ray, in which she featured in Vasan Bala's segment titled Spotlight. She has a film titled Shiddat and another Netflix series Feels Like Ishq lined up.