Ray Review: The Manoj Bajpayee-Gajraj Rao duet wins hands down although Kay Kay Menon as the tormented prosthetics man in Bahrupia isn't far behind. Ali Fazal fleshes out a cocky, self-serving numbers man who pushes his luck too far. 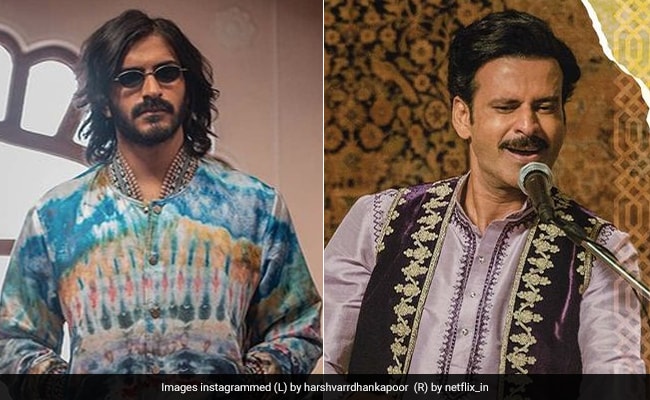 Ray Trailer: Harshvardhan Kapoor and Manoj Bajpayee in stills from the show

Three disparate directors have a shot at four Satyajit Ray short stories in this Netflix Original series produced by Viacom18. The result is excitingly varied, if not entirely satisfactory. The trio has reinterpreted the original written texts clearly in the light of their own creative sensibilities (like it or lump it) rather than in the hope of imitating the maestro. The latter would anyway have been an imprudent attempt to make.

Depending upon what one makes of the notion of a filmmaker's prerogative to follow his heart, Ray could be seen either as a merciless mauling of a master or a daringly different take on essentially minimalistic and witty tales of human foibles written in an era gone by. The truth lies somewhere between the two.

Srijit Mukherji, who helms two of the films in the anthology, resorts to weirdly dark strokes and glides well away from the core of the Ray stories that he adapts - Forget Me Not (from Bipin Chowdhury'r Smritibhrom, or Bipin Chowdhury's Memory Loss) and Bahrupiya (from Bohurupi, or The Impersonator).

Stylistically and in terms of substance, the two films are way more Srijit than Satyajit. They are in the same zone as the director's Baishe Srabon, Vinci Da and Dwitiyo Purush, which, in effect, means that there is little in them that could be described as organic echoes of the source material.

Ray was famous for his psychological probes into unusual minds, but not quite of the sort that Mukherji brings to the exploration of the unravelling of two men - one a supercilious corporate honcho who prides himself on his computer-like memory but begins to lose his mind when he is unable to recall what he did during a weeklong dalliance three years ago; the other a self-effacing makeup artist who seeks refuge behind his impersonations and settles scores with those he feels have sold him short.

The last film in the series, Vasan Bala's Spotlight is a defiantly, and delightfully, campy affair. It throws Bollywood, Hollywood, Ray and a whole lot of "psycho-spiritual" babble into a crucible and stirs it all up into a frothy, zany brew that is way beyond anything the writer of the short story would ever have imagined.

If you want a Ray story to be told exactly in the manner that the filmmaker in him would have wanted to, then Mukherji and Bala will not only not satisfy you, they might even infuriate you. That perhaps is the whole idea behind Ray - take his stories and recast them for a new generation that has no preconceived notions about them. But among purists, the jury will be out for a while.

Manoj Bajpayee plays a Bhopal-based ghazal singer on his way to Delhi for a performance. Gajraj Rao is cast as a former east Delhi wrestler who edits a sports magazine. Chaubey's casting is half the battle won. His delectable segment also draws strength from the wit inherent in the original story about a perfectly respectable gentleman who cannot resist the temptation of stealing things that do not belong to him. His ailment comes back to haunt him when he runs into a person he filched a Swiss travelling watch from many years ago.

One interesting aspect of Ray is that barring Hungama Hai Kyon Barpa (the title is borrowed from Ghulam Ali, whose voice croons about chori in dulcet tones on the soundtrack), the reworkings create space for significant female characters. Women had limited presence in Ray's literary universe - surprising for a man who gave world cinema a few of its most memorable 'feminist' films (Charulata, Devi, Mahanagar).

Forget Me Not apportions a key role to a woman wronged, who replaces a male character from the Ray original. Of course, both Forget Me Not, headlined by Ali Fazal, and Bahrupiya, with Kay Kay Menon in the lead, are about seriously flawed men who bring misfortune upon themselves by either riding roughshod on others or attempting an overreach that misfires. And in both, a woman is at the receiving end of their desperate acts of vanity and vengeance.

Vasan Bala's film, too, has a woman, whose ability to enrapture the masses gives a movie star (Harshvardhan Kapoor) with a chip on the shoulder a complex so massive that he nearly runs aground despite the best efforts of friend, adviser and all-weather trouble-shooter Roby (Chandan Roy Sanyal). The latter's first name is a tribute to actor Robi Ghosh, one of the leads of Ray's timeless musical comedy Goopy Gyne Bagha Byne.

It is another matter that Kapoor never gets the pronunciation right - he calls his 24X7 aide 'Robby' rather than 'Rowbee'. That apart, a T-shirt the hero wears has an image of Robert De Niro with a gun (from a Taxi Driver scene) and 'Scorse Dada' imprinted on it in Bangla. Shouldn't it have been Scorsese? Minor niggles those in an hourlong film that is otherwise pure fun.

Spotlight is a movie trivia geek's delight because it goes beyond just Ray and Scorsese. Thrown in are references to Daniel Dy-Lewis's My Left Foot and De Niro's The Raging Bull. 'Gonzo and Duke' is emblazoned on one of the T-shirts the hero dons. This isn't Las Vegas, but there is fear and loathing all right in the mind of Vikram Arora, who swings between the Kafkaesque and the Lynchian without knowing what either of them means.

Vasan Bala's film sticks to the title of the Ray work. That is about it. Everything else in Spotlight is a freewheeling reimagining and expansion of the character of an insecure movie star acutely aware of his limitations as an actor. The guy, full of himself, is unable to countenance the fact that, when he checks in to a luxury hotel for a film shoot, he is upstaged by someone, in this case a godwoman whose followers wear blue and swear unquestioning allegiance to her.

The Madonna room that Vik wants - it is where the Material Girl stayed when she was in Mumbai - is taken away from him and given to Didi and her disciples. He throws a fit, threatens to walk out of the film (it is titled Chiriyaghar for more reasons than one; a series of other Ray film titles crop up later), and then repeatedly muffs up his 'entry scene' as the director (Vasan Bala himself) struggles to egg him on.

As for the performances, the Manoj Bajpayee-Gajraj Rao duet wins hands down although Kay Kay Menon as the tormented prosthetics man in Bahrupia isn't far behind. Ali Fazal fleshes out a cocky, self-serving numbers man who pushes his luck too far with some effort to spare in Forget Me Not. Harshvardhan Kapoor plunges into his mercurial movie star act with enthusiasm, but, like the character that he plays, he is at times outdone by Chandan Roy Sanyal.

The girls in Ray - Shweta Basu Prasad and Anindita Bose (Forget Me Not), Bidita Bag (Bahrupia) and Radhika Madan (Spotlight) - are given their due. In return, they give it all they have.

Would anybody ever use the adjectives "wild", "wacky" and "whimsical" to describe anything that the firmly classicist Ray ever made or wrote unless one is discussing Goopy Gyne Bagha Byne, which Bala alludes to in his film through the means of a Ray-designed poster on a T-shirt that the protagonist sports and the streak of sheer magic that takes over in the climax? Netflix's Ray is fearless in its upending of norms - and expectations. When it hits the sweet spot, which it occasionally does, it is entertaining in its own eccentric, if erratic, way.