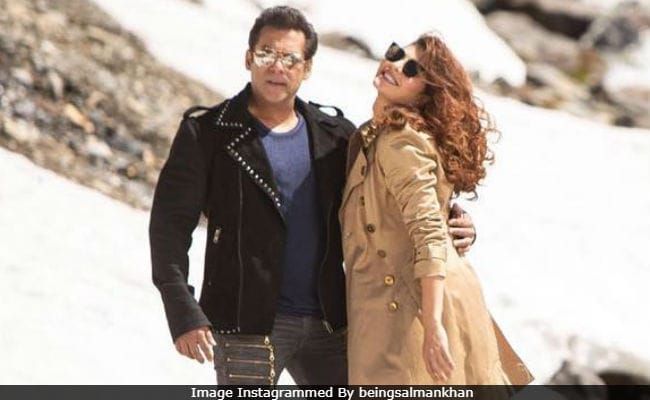 New Delhi: Superstar Salman Khan thanked the Jammu and Kashmir Tourism department for supporting the shooting of Race 3, his forthcoming film. Salman shared a picture with his co-star Jacqueline Fernandez and captioned his post as, "Thank you Jammu & Kashmir tourism for all the support and the wonderful experience for Race 3." Jacqueline also posted her comment and wrote, "Such beautiful memories here." Team Race 3 had shot a part of the film in Sonamarg (Jammu and Kashmir) in April. The first schedule of the film was completed in Abu Dhabi. Meanwhile, Salman's picture with Jacqueline is viral, obviously. (Over 5 lakh views and counting).

Thank you #Jammu & #Kashmir tourism for all the support and the wonderful experience for #Race3 . #Race3 #Race3ThisEid

We thank the Chief Minister Madam Mehbooba Mufti for welcoming us in Kashmir for the Final Lap of #Race3 with @BeingSalmanKhan#Race3InKashmir#Race3ThisEidpic.twitter.com/T6pRRzKQIu

Jacqueline had shared these pictures.

Before Race 3, Salman had shot 2015's Bajrangi Bhaijaan in Sonamarg.

Salman Khan's Race 3 also stars Anil Kapoor, Bobby Deol, Daisy Shah and Saqib Saleem. It is a sequel to the previous two Race films, headlined by Saif Ali Khan. Anil Kapoor has been part of both the Race films while Jacqueline joined the team in the second part.

Promoted
Listen to the latest songs, only on JioSaavn.com
Race 3 hits the screens this Friday. The film's satellite rights have reportedly been sold for Rs 130 crore.

Race 3, an action-thriller, promises some high octane action sequences and stunts.Race 3 is directed by Remo D'Souza and releases on June 15.