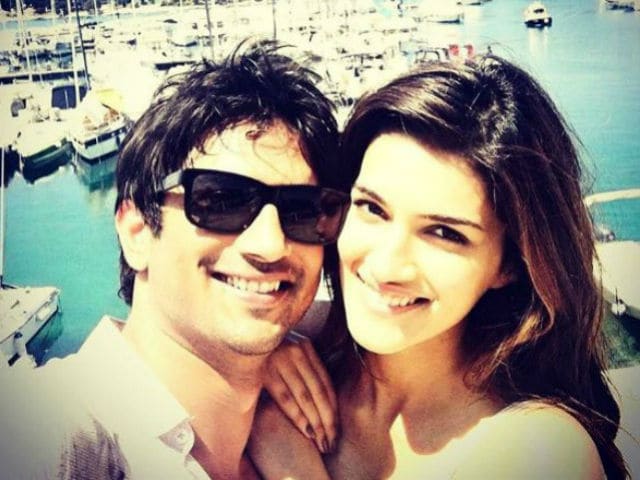 Kriti Sanon and Sushant Singh Rajput on the sets of Raabta

New Delhi: The first look of Sushant Singh Rajput and Kriti Sanon's much talked about film Raabta was revealed on Friday. The film has been directed by Dinesh Vijan, who has also co-produced it with Homi Adajania and Bhushan Kumar. Raabta, shot in the picturesque locales of Budapest, was reportedly set to release on the Valentine's Day week this year. However, the release date was shifted to avoid clash with Akshay Kumar's Jolly LLB 2. Actress Kriti Sanon shared the first poster of the film on Twitter and wrote, "Something drew me to him, a connection that I cannot explain. A #Raabta! #RaabtafirstLook. (sic.)" The film is slated for June 19 release.

Something drew me to him, a connection that i cannot explain.. A #Raabta !! #RaabtafirstLook@RaabtaOfficial@itsSSRpic.twitter.com/O9Jh7NOalu

In a separate tweet, Sushant Singh Rajput said: "I wonder if she felt the same way I did, like there was something more, some unexplainable connection, a #Raabta. #RaabtaFirstLook. (sic.)"

I wonder if she felt the same way I did,like there was something more, some unexplainable connection,a #Raabta#RaabtaFirstLook@kritisanonpic.twitter.com/2g1N70qWDg

On Thursday, the film's official Twitter handle also shared a video where both the actors are seen arranging the pieces of a puzzle that finally resulted in the film's first look. The trailer of Raabta will be out on April 17.

What's without fun, games & lots of madness! @itsssr & @kritisanon have something to show you... #RaabtaFirstLook@TSeries@MaddockFilmspic.twitter.com/pIY1mFRG6U

Sushant Singh Rajput and Kriti Sanon reportedly started dating while they were shooting for the film. However, both Sushant and Kriti always denied the rumours.

Promoted
Listen to the latest songs, only on JioSaavn.com
Sushant and Kriti reportedly had a fight because of the former's alleged mood swings. But the duo was photographed together in Mumbai earlier this week. Sushant took Kriti for a drive in his recently purchased car and pictures went viral.

Sushant was last seen in MS Dhoni: The Untold Story and Detective Byomkesh Bakshy . He is now working on Drive. Meanwhile, Kriti Sanon is gearing up for the release of Bareilly Ki Barfi after Raabta.