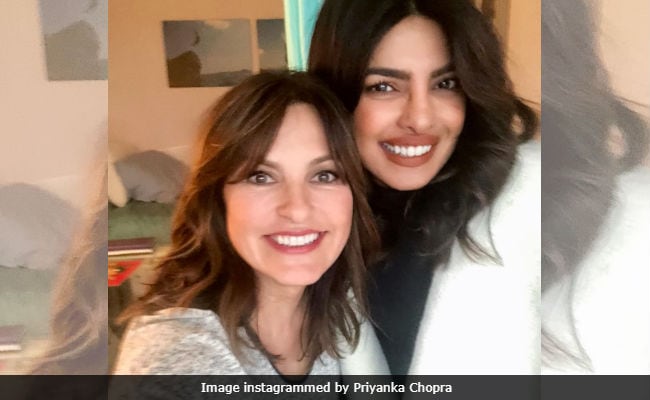 New Delhi: Actress Priyanka Chopra and her mother Madhu Chopra are fans of TV series Law And Order (then of course, who isn't?). Priyanka met actress Mariska Hargitay, who plays the role of Lieutenant Olivia Benson, on the sets of the show and instagrammed her fangirl moment. We assume Priyanka was filming her own television series Quantico in the vicinity. "I'm still having a moment. One of my favourite actors on one of my favourite shows - Mariska Hargitay you're just as much of an inspiration in reality as you are on Law And Order... Mom will be jealous lol," Priyanka captioned the photo. Priyanka said that it was "incredible" watching Mariska and Kelli Giddish (Detective Amanda Rollins, for fans) shoot a "hugely powerful scene."

I'm still having a moment. One of my favourite actors on one of my favourite shows. @therealmariskahargitay you're just as much of an inspiration in reality as you are on @lawandorder.svu it was incredible watching her and @kelligiddish shoot a hugely powerful scene... amazing!! Mom will be jealous lol! #daymade #fangirl

Priyanka Chopra is currently in the US filming the third season of Quantico, which made her a household name there. Priyanka plays the lead role of Alex Parrish, an FBI rookie who graduates to become a CIA agent. The show's first episode was aired in September 2015 and it was an instant hit with the audience. However, the second season which began a year later was not as successful. The show's TRPs and views dipped significantly.

Promoted
Listen to the latest songs, only on JioSaavn.com
Nonetheless, Quanticowas renewed for a new season and Alex Parrish and her team geared up to enthrall the audience. Priyanka posted several updates referencing her show on Instagram, which hints that season #3 may be amazing.

Apart from Quantico, Priyanka Chopra is awaiting the release of A Kid Like Jake and Isn't It Romantic?. She hasn't announced her next Bollywood project yet.