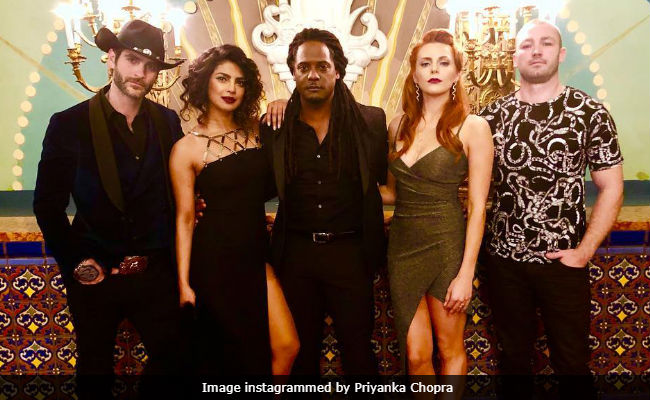 New Delhi: Priyanka Chopra's Quantico season 3 just got an interesting twist. Priyanka, 35, who headlines the cast of the crime thriller, shared two new pictures from the sets of the show, which are just W.O.W. Unlike her usual on the sets pictures, where she's clad in formals (or semi-formals) with a look of urgency, Priyanka looked uber-glam in a black Versace thigh-high slit dress. In a caption, Priyanka revealed that she and are co-stars were doubling as undercover cops in a sequence, for which they dressed up for a casino night, and thus, the stunning look. Take a look at Priyanka's 'casino night' for Quantico here:

In the pictures, Priyanka is joined by her co-stars Blair Underwood, who started his Quantico journey in season 2 and Jake McLaughlin, series regular from the beginning. Jake has been cast as Priyanka's onscreen love interest in the show. Actors Alan Powell (undercover agent Mike McQuigg) and Amber Skye Noyes (as Celine Fox), who played minor characters in the show up until season 2, will get larger roles in the upcoming third season.

Priyanka Chopra resumed filming Quantico 3 earlier this month and every alternate day new pictures from the show's sets are breaking the Internet. The first set this season was Priyanka beating the chill in an all-black outfit, followed by distressed jeans-skirt look (which the Internet can still not get over with) and finally, 'when Priyanka Chopra saved the day' picture.

Promoted
Listen to the latest songs, only on JioSaavn.com
Take a look here:

@priyankachopra shrugs off the chilly winters like a fashion pro!

Quantico season 3 will go on air from April 26.