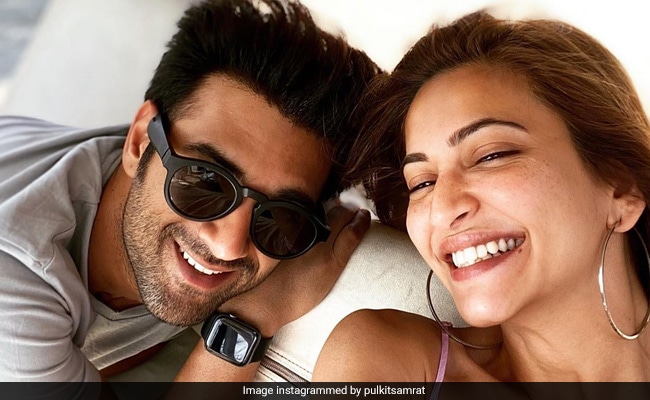 Pulkit Samrat and Kriti Kharbanda shared identical posts on their respective Instagram posts on Thursday and it wouldn't be wrong to say that the actors' PDA is just too cute. In the selfie, both Pulkit and Kriti can be seen smiling with all their hearts as they pose together. In the photograph, Pulkit can be seen dressed in a grey t-shirt while Kriti can be seen wearing a pink top and she looks pretty as ever. Pulkit captioned his post: "Pretty Kharbanda," while the caption on Kriti's post read, "us." She added a heart emoji with her post.

Kriti and Pulkit co-starred in the 2018 film Veerey Ki Wedding. They also shared screen space in the comedy film Pagalpanti. The actors will co-star in Bejoy Nambiar's Taish. They often make appearances on each other's Instagram profiles.

Pulkit Samrat, who frequently features in headlines for his rumoured relationship with Kriti, in an interview with news agency IANS, said, "Working with her is insane. I wouldn't have been able to survive a couple of films if she was not my co-star." He added, Firstly, we share comfort and camaraderie. She has been an earthing wire, balancing me on the set. If I do something wrong, I give a retake if she does not like it. If she smiles at me after a shot, I know it's okay. I look for reassurance from her."

On the work front, Kriti Kharbanda featured in films such as Housefull 4 and Pagalpanti. She will next be seen in the Tamil film Vaan.

Pulkit Samrat will next be seen in Haathi Mere Saathi, co-starring Rana Daggubati. Haathi Mere Saathi is a tribute of sorts to Rajesh Khanna, who famously starred in the 1971 classic movie of the same name. But the new one will not exactly be a remake and have a different plot. Prabhu Solomon is directing the film.