"On this Guru Purnima, it is an honour for me to clap for the Guru of Indian cinema!" wrote Prabhas 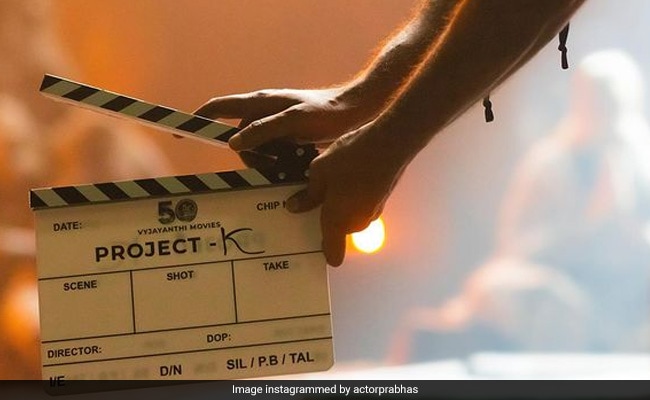 An update on Nag Ashwin's sci-fi drama, starring Amitabh Bachchan, Prabhas and Deepika Padukone, sent the Internet into a meltdown on Saturday. Looks like that film has been tentatively titled Project K. On Saturday, both Prabhas and Mr Bachchan checked into Instagram to reveal that the schedule of the movie has kick-started. Both the actors shared a glimpse of the mahurat shot of Project K. Prabhas, who snapped the clapperboard for Project K, added a heart-warming post for Amitabh Bachchan. "On this Guru Purnima, it is an honour for me to clap for the Guru of Indian cinema! It now begins!" Prabhas dedicated this note to Mr Bachchan.

Meanwhile, Amitabh Bachchan also appears to be a fan of Prabhas' body of work, particularly the Baahubali films. Here's what Big B wrote for Prabhas: "For the mahurat shot of Project K... what an honour to be behind the clap being given by the icon that created cinematic magical waves throughout the country and the world with Baahubali."

Deepika Padukone had joined the cast of Prabhas' Project K in July last year and made the big announcement like this: "Beyond thrilled! Cannot wait for what we believe is going to be an incredible journey ahead." Meanwhile, Amitabh Bachchan's inclusion in the cast was revealed in October, when Prabhas shared his excitement over working with the cinema legend: "Finally, a dream coming true...Sharing screen space with the legendary Amitabh Bachchan sir."

Project K, which will release in Tamil, Telugu and Hindi, is slated to release worldwide in 2022.