Priyanka Chopra's 'OOTN' picture has been liked over 5 lakh times 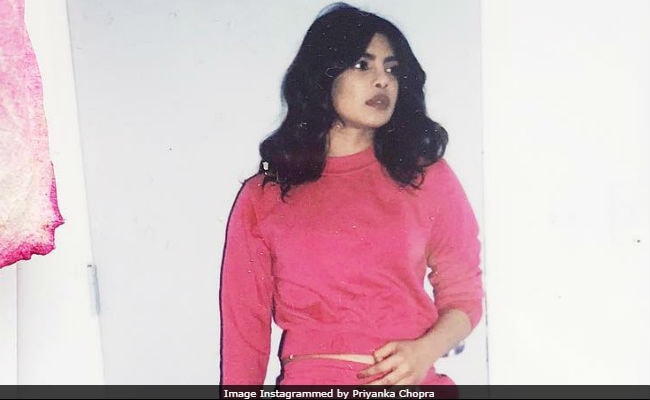 New Delhi: In between all the updates about the forthcoming season of Quantico, Priyanka Chopra just dropped this 'OOTN' picture of her on Instagram and her fans went crazy. In the picture, which has been liked over 5 lakh times, Priyanka can be seen wearing a casual pink top with matching bottoms and that's not it. She teamed her outfit with super cool white sneakers. Priyanka captioned the picture "OOTN" with sparkling heart emoticons. Priyanka's Instagram is a testimony to her feisty style and this outfit is just one of the many gems. Priyanka is currently in New York, where she is shooting the third season of the popular TV show Quantico.

The Baywatch actress has aced her style and her recent Instagram updates stand as a proof.

And then he said.. "I hate to see you go... but I love to watch you leave.. " #dayatwork @abcquantico pic credit @chanchal_dsouza

A couple of days back, Priyanka shared a picture (what might be perhaps the last update from the sets of Quantico Season 3) with her co-stars and revealed that the shooting is in its last stage, with barely a few days left. "Beautiful day on set. Last 3 days of shoot in NYC! Then Globetrotting begins. #quantico @alanpowell10 @themarleematlin @thejohannabraddy."

Promoted
Listen to the latest songs, only on JioSaavn.com
Apart from shooting Quantico Season 3, Priyanka had been keeping busy with her upcoming Hollywood films - A Kid Like Jake and Isn't It Romantic?. Quantico Season 3 will air on April 26.

Her last Bollywood project as an actress was Prakah Jha's Jai Gangaajal. She is also involved in backing regional projects as a producer. A Sikkimese film Pahuna was the latest project of her production house Purple Pebble Pictures.
Comments
Priyanka Chopraquantico 3