In one of the pictures, Priyanka Chopra can be seen soaking in a bathtub, wearing a headpiece with floral accents and jewellery 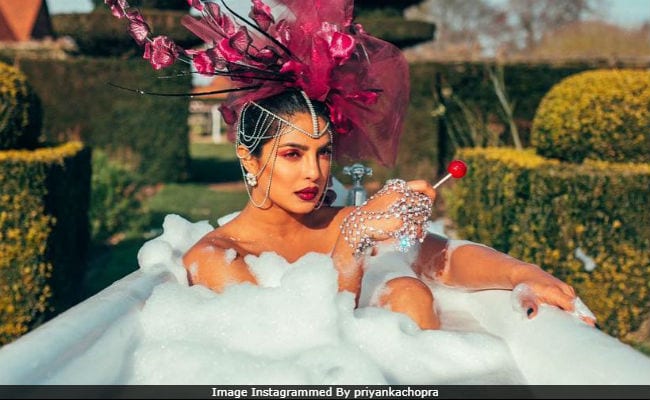 Priyanka Chopra surprised her fans by making an appearance in Jonas Brothers' new single Sucker and now, she recently posted some behind-the-scenes pictures of herself from the shoot, which are now viral. (Not surprised). In one of the pictures, Priyanka can be seen soaking in a bathtub, wearing a headpiece with floral accents and jewellery and in the other, she hugs husband Nick Jonas. The third photo, in which the couple have been photographed from the back, appears to be taken after the pack-up. "Glam baths, yes, please. The Jonas Brothers are back! Sucker... Before and after. Best hubby ever," Priyanka captioned the post. In just three hours, the pictures got over 8 lakh likes (and very much counting).

Glam baths .. yes pls.. the #jonasbrothers Are back! #sucker Before and after. Best hubby ever. @nickjonas

Sucker is Jonas Brothers' comeback single, which they made after six years. Nick, Kevin and Joe appear in the video with their respective partners Priyanka Chopra, Danielle and Sophie Turner. The couples light up the video every time they appear. Sucker got whole lot of love from the Jonas Brothers' fans and on the Internet, it's one of the top trends till now.

Sucker has been shot in England. "We really had the best time shooting this video in England with our family," he wrote on Instagram, adding, "Feels good to be back."

#SuckerVideo is officially out! We really had the best time shooting this video in England with our family. Hope you guys love it. Feels good to be back @jonasbrothers

Nick, Kevin and Joe Jonas formed their band in 2005 and split up in 2013. It's About Time, A Little Bit Longer, Lines, Vines and Trying Times followed are some of their albums.