Jonas Brothers' Sucker: Nick, Kevin and Joe Jonas' first single in six years has been filmed at a lavish mansion in England 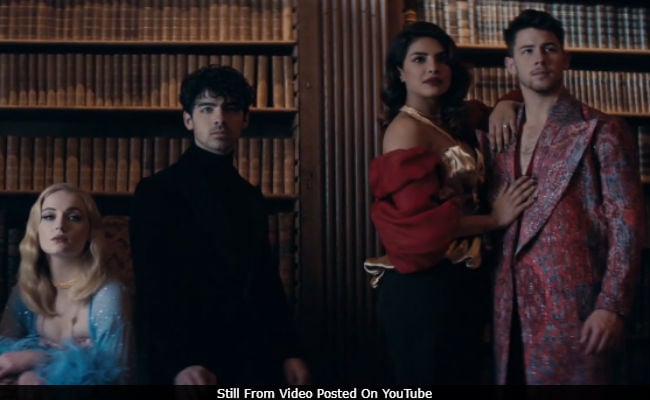 Yes, the Jonas Brothers - Nick, Kevin and Joe - are back! And, on Friday, they unveiled their comeback single Sucker. Excited much? What if we tell you that Priyanka Chopra also makes an appearance in the music video? Can't keep calm, right? In the video featuring Nick, Kevin and Joe Jonas, their respective partners - Priyanka, Danielle and Sophie Turner - also join them. Sucker, their first single in six years, has been filmed in England (as revealed by Nick in his Instagram post) and the location appears to be a lavish mansion. In the song, which celebrates love, the Jonas Brothers sing, "I'm a sucker for you..." They can be seen dancing and partying around sporting dramatic looks. Each couple make quite a few appearances in the video and shine every time onscreen. Also, their PDA is on point. When the Jonas Brothers perform together, Nick can be seen wearing red trousers and a matching vest, Kevin a red and black sequinned suit while Joe sports an all-black look. We can see Priyanka, Danielle and Sophie cheering for them during their performance. Sucker is directed by Anthony Mandler.

"Sucker video is officially out! We really had the best time shooting this video in England with our family. Hope you guys love it. Feels good to be back," Nick posted while releasing the video. Priyanka wrote that she's "proud" of her husband. "This is the first time we've worked together but not for a moment did it feel like work. Such a fun family affair... Jonas Brothers and the J Sisters cheering each other on! Proud of you, husband," she wrote.

Nick, Kevin and Joe Jonas formed their band in 2005 and split up in 2013. As a band, they made several appearances on Disney channel and featured in the Camp Rock films. Their first album It's About Time released in 2006 and soon, A Little Bit Longer and Lines, Vines and Trying Times followed.

The Jonas brothers will appear on The Late Late Show With James Corden next week.

Nick Jonas married Priyanka Chopra in December 2018 in India. Kevin and Danielle married in 2000 while Joe is engaged to Game Of Thrones actress Sophie Turner.