The Jonas Brothers Are Back With New Single Sucker

"And yes they're back and may I say... Hotter than ever. So proud of the family," wrote Priyanka Chopra 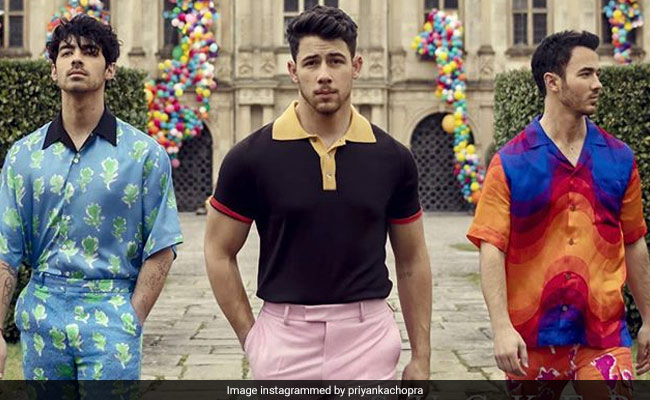 The Jonas Brothers are back. (Image courtesy: priyankachopra)

We have good, actually great news for all the Jonas Brothers fans out there. The Jonas Brothers are back and in the words of Nick Jonas' wife Priyanka Chopra, they are "hotter than ever." On Thursday night, Nick, Kevin and Joe shared the big news on their respective social media accounts by sharing a picture of themselves together and revealed that their comeback single is titled Sucker. In their posts, the Jonas Brothers revealed that the song is expected to release by midnight. Meanwhile, an excited Priyanka Chopra also shared the news on her Instagram profile and wrote: "And yes they're back and may I say... Hotter than ever. So proud of the family." She accompanied the post along with the hashtags "#Sucker, #JonasBrothers" and "#MidnightET."

And yes they're back...and may I say... hotter than ever. So proud of the family #Sucker #JonasBrothers #MidnightET

Soon after the Jonas Brothers announced the news of their comeback single Sucker, a promo video of James Corden's The Late Late Show was shared on the band's official Instagram page, wherein the trio confirmed that they are back. Needless to say, fans were delighted on hearing the big news and they just couldn't keep calm. "I thought that this would not happen again. I'm crying, thank you so much," commented an Instagram user. "Oh my gosh! Unreal," wrote another fan. "My heart can't handle this," read another comment.

The Jonas Brothers occupied a spot on Twitter's trends list all of Thursday, after they deleted all posts from the band's verified Twitter account and replaced the display picture with a black window, cryptically hinting at the band's possible reunion, which sent the Internet into a state of frenzy.

Here's what some fans tweeted:

THE JONAS BROTHERS DELETED ANY PREVIOUS POSTS AND BLACKED OUT THEIR SOCIAL MEDIA IT'S HAPPENING PEOPLE THEY'RE COMING pic.twitter.com/WpIneaic2z

The Jonas Brothers will be reuniting after six long years. The band became a household name after they made appearances on the Disney channel. Nick, Kevin and Joe started the band in the year 2005 and they featured in the Camp Rock films. They were also a part of the Disney series titled Jonas.