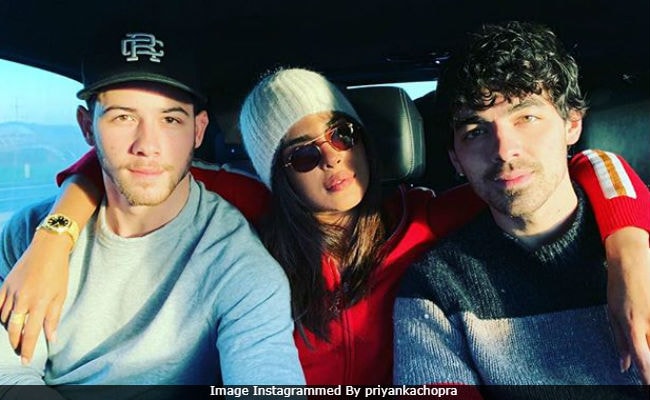 Actress Priyanka Chopra, who married singer Nick Jonas earlier this month, is currently in London to celebrate Christmas with his family. Priyanka shared a set of pictures from Christmas Eve on Instagram, which beautifully sums up the fabulous time they are having in London. "Love you family," Priyanka captioned one of her posts, in which she features with the Jonas' and her mother Madhu Chopra. In another photo, she can be seen posing with husband Nick Jonas and his brother Joe. "Brothers in (my) arms... always and forever," wrote Priyanka. Priyanka and Nick flew to London last week, soon after their Mumbai reception.

Here's how Priyanka Chopra's first Christmas celebrations with the Jonas' looks like.

Several photos of the couple dining out with their families at a posh restaurant in London have also been shared by several fan clubs.

On Sunday, after Nick was named the Most Stylish Man of 2018 by GQ, Priyanka celebrated his big win with a loved-up post, She shared a photo of herself kissing Nick Jonas and wrote, "Honoured to be kissing the most stylish man on the planet... may the style Gods always shine down upon you, my love!"

Honoured to be kissing the most stylish man on the planet.. may the style Gods always shine down upon u my love #gqmoststylishman @nickjonas

In the US, Priyanka Chopra and Nick Jonas are expected to host a reception in Los Angeles next month.

Priyanka Chopra and Nick Jonas married at Umaid Bhawan Palace in Jodhpur in December. They first married as per Christian rituals and later a Hindu wedding ceremony was held. In India, they hosted three wedding receptions. In the last one, Priyanka invited her Bollywood colleagues.