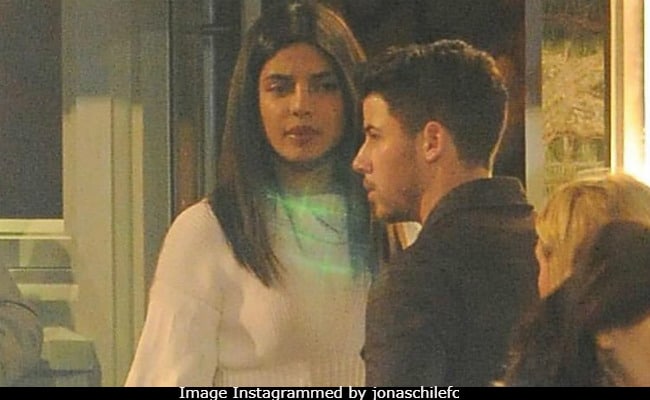 Priyanka Chopra and husband Nick Jonas, who flew out of India soon after their star-studded Mumbai reception, were spotted soaking in the pre-Christmas vibes in London. Photos of the newlyweds outside upscale restaurants in London on two consecutive nights over the weekend have gone crazy viral on the Internet. On Saturday, the couple stepped out with Nick's brothers Joe and Franklin and Priyanka's brother Siddharth Chopra. Joining the team were Joe's fiancee Sophie Turner (Game Of Thrones actress) and Priyanka's mother Madhu Chopra. Meanwhile on Sunday, Priyanka and Nick took their respective families to Asian eatery Sexy Fish at London's Mayfair.

For the Sunday outing, Priyanka wore a white cropped cardigan to go with her frilled skirt and styled her hair in neat middle parting. Sophie Turner, who was spotted chatting with Siddharth Chopra in pictures on social media, opted for an all-black look. She paired a long coat to go with her separates. Priyanka accessorised with a small white handbag.

The day before, Priyanka redefined the pant-suit look as she paired a satin blazer and pant combo with a fluorescent green crop sweater, that showed her mangalsutra. She wore black pumps and accessorised with gold statement jewellery. She was spotted exiting an eatery in Covent Garden, hand-in-hand with Nick Jonas.

Priyanka also celebrated Nick Jonas' big win with an adorable social media post. Nick was named the Most Stylish Man of 2018 by GQ and sharing a photo of hers kissing Nick Jonas, Priyanka Chopra said: "Honoured to be kissing the most stylish man on the planet... may the style Gods always shine down upon you, my love!"

Honoured to be kissing the most stylish man on the planet.. may the style Gods always shine down upon u my love #gqmoststylishman @nickjonas

Priyanka Chopra and Nick Jonas are expected to host a lavish reception in Los Angeles towards the end of January. Their reported guest-list is said to include names such as Dwayne The Rock Johnson (with whom Priyanka made her Hollywood debut in Baywatch), celebrity TV show host Ellen DeGeneres and Priyanka's good friend the Duchess of Sussex Meghan Markle.

Priyanka Chopra and Nick Jonas had a destination wedding in Jodhpur earlier this month. The couple hosted three wedding receptions in India - the one in Delhi was followed by two more in Mumbai.