Priyanka Chopra Kisses Nick Jonas In Adorable Pic, Her Post For 'The Most Stylish Man On The Planet' Is Couple Goals x Infinity

Priyanka cheered for Nick Jonas with an adorable photo, in which she can be seen planting a kiss on her husband's cheek 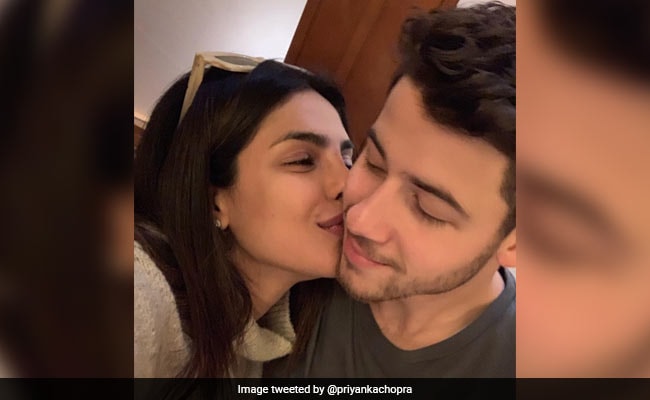 Priyanka Chopra celebrated husband Nick Jonas' latest popular title - the Most Stylish Man Of 2018 as evaluated by GQ - with a loved-up post on her social media accounts. The 26-year-old singer was recently named by GQ as the squad leader of the Most Stylish Men of this year. In the final leg, Nick Jonas found himself in a spot opposite Dwayne The Rock Johnson, with whom he co-starred in 2017 film Jumanji and Priyanka made her Hollywood debut in Baywatch. But according to GQ, Nick Jonas was the clear winner, steering ahead of the race with a huge margin: "And from the get-go, Jonas had a commanding lead that stayed with him until polls closed," said GQ.

Priyanka cheered for Nick Jonas with an adorable photo, in which she can be seen planting a kiss on her husband's cheek, and also an even more adorable caption that says: "Honoured to be kissing the most stylish man on the planet... may the style Gods always shine down upon you, my love!"

This photo of Priyanka kissing Nick will warm the cockles of your heart.

Honoured to be kissing the most stylish man on the planet.. may the style Gods always shine down upon u my love #gqmoststylishman@nickjonaspic.twitter.com/J1m5yr6MWw

Meanwhile, here's what Nick Jonas tweeted after his big win:

From back then to now. I've been focused on one thing, and one thing only... being stylish. Not just stylish... being the MOST stylish, and even though it took over 26 years I'm really happy to finally be recognized for this tireless commitment to being stylish. pic.twitter.com/UR4kB7IwPM

To the fans all over the world who voted for me please know I don't take this honor lightly. I will wear this stylish crown with pride in my heart, all while in my well tailored "fits". Happy holidays everyone, and above all... Stay stylish. #style#stylish#gqmoststylishman#gq

Priyanka Chopra and Nick Jonas had a destination wedding in Jodhpur earlier this month. The newlyweds then hosted a reception in Delhi, followed by two more in Mumbai. In between, they took off for a brief honeymoon to what appeared to be Oman. Priyanka shared this photo of "marital bliss" from the undisclosed location.

Priyanka Chopra and Nick Jonas are currently said to be in London. In pictures on social media, the couple can be spotted hanging out with their families at a London eatery.

The 36-year-old actress is also said to be hosting a glitzy reception party in Los Angeles' Malibu for her Hollywood friends reportedly at the end of January. Reports suggest that Priyanka and Nick's LA reception guest list will include names such as her Baywatch co-star Dwayne Johnson, talk show host Ellen DeGeneres, and Priyanka's good friend the Duchess of Sussex, Meghan Markle. Earlier this year, Priyanka was part of Meghan Markle and Prince Harry's royal wedding.