Thank you for this picture, Nushratt Bharuccha 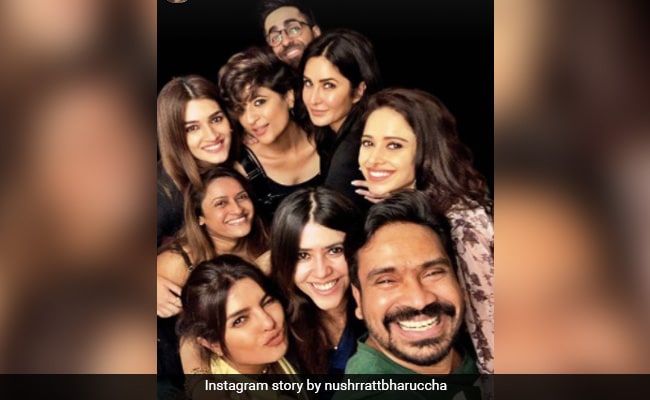 Nushratt Bharuccha's latest Instagram post has taken us back to the time when many Bollywood stars got together for a party in 2019. On Monday, Nushratt posted a throwback picture of herself and her industry colleagues from the party on her Instagram story. In the picture, we can spot Priyanka Chopra, Katrina Kaif, Kriti Sanon, Nushratt Bharuccha, Ayushmann Khurrana and Tahira Kashyap. Producer Ekta Kapoor, publicist Rohini Iyer and screenwriter Mushtaq Sheikh are also posing with them. While all of them are flashing their beautiful smiles, we couldn't ignore Priyanka's adorable pout. The picture was clicked at Rohini's house party two years ago.

Nushratt chose this picture to wish Ekta Kapoor on her birthday. "Happy birthday Ekta Kapoor. Cannot wait to do these celebrations together again. Till then lots of love,” she wrote.

We found this picture on Rohini Iyer's Instagram handle. Tahira Kashyap had initially posted the photo on Instagram and Rohini reshared it on her Instagram handle back in 2019. Rohini wrote, "Beautiful souls, hearts of gold."

Rohini Iyer had organised the party for her friends from B-Town at her residence in November 2019. Actors like Aditi Rao Hydari, Yami Gautam, Diana Penty, Patralekhaa, Bhumi Pednekar, Rajkummar Rao and Raveena Tandon were also invited there. See their pictures from the celebration.

Coming back to Nushratt Bharuccha, the actress worked with Ekta Kapoor in Raaj Shandilyaa's 2019 film Dream Girl. Nushratt was paired opposite Ayushmann Khurrana in the movie. Ekta produced the 2019 film under the banner of her production house, Balaji Motion Pictures.

Ekta Kapoor celebrated her 46th birthday on Monday. She is the daughter of actor Jeetendra and actress Shobha Kapoor. Tusshar Kapoor, who is also an actor, is Ekta's brother.

Ekta is TV and film producer. She has created TV shows like Kyunki Saas Bhi Kabhi Bahu Thi, Kahaani Ghar Ghar Ki, Kaahin Kissii Roz and Kasautii Zindagii Kay. Ekta has produced movies such as Love Sex aur Dhokha, Once Upon a Time in Mumbaai and Shor in the City.

Pooja Hegde, Who Had Covid This Year, Gets Her First Vaccine Shot