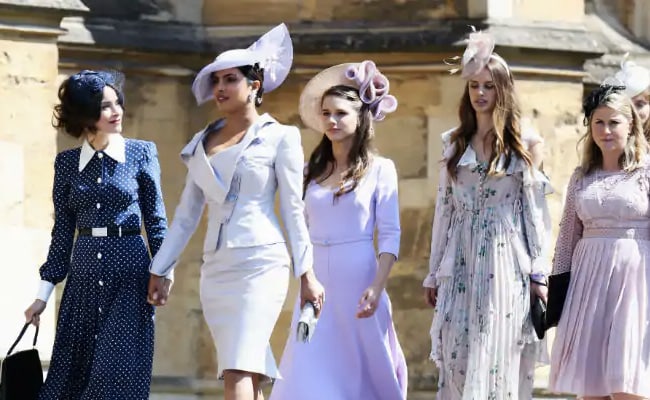 A day after Meghan Markle celebrated her 40th birthday by announcing her new '40X40' initiative, Priyanka Chopra has revealed that she is one of the 40 women that Ms Markle has recruited to mentor women looking to re-enter the workforce. "The Duchess of Sussex has asked 40 of her friends to take 40 minutes to support women getting back into the workforce...Of course I was more than happy to join. Now that's a great way to celebrate a milestone Birthday. Bravo, my friend," Priyanka Chopra wrote in a post she shared this morning; the operative word here is friend - Priyanka Chopra and Meghan Markle struck up a friendship which, according to several reports, veered off course a couple of years ago.

The '40x40' initiative, launched on the Archewell Foundation that Meghan Markle runs with her husband Harry, aims to help women who left the workforce last year - largely because of COVID - and are struggling to return. 40 prominent women have been asked to donate 40 minutes of mentorship to the cause - apart from Priyanka Chopra, singer Adele, activist Gloria Steinem, designer Stella McCartney and actress Tracee Ellis Ross are among these 40 women.

"Happy birthday, Meghan. For her 40th birthday this year, in true Meg fashion, she's chosen to put the welfare of others first," Priyanka Chopra began her post for Meghan Markle before going on to explain what the '40X40' initiative aims to do. Read her post here:

Priyanka Chopra and Meghan Markle became friends when Ms Chopra was headlining Quantico and Ms Markle was starring in Suits and engaged to marry Prince Harry of the British Royal Family. Both actresses posted photos of themselves hanging out together - Ms Markle's Instagram was deleted when she married.

Priyanka Chopra wrote an essay for Meghan Markle when she made the annual Time 100 List and attended Ms Markle's wedding in 2018. However, Meghan Markle, then pregnant with son Archie, failed to reciprocate when Priyanka Chopra and Nick Jonas married in 2019 and the no-show reportedly caused a rift. Tabloids went into overdrive, especially when Ms Chopra's absence at Meghan Markle's baby shower in New York caused comment and the Baywatch star herself dismissed reports that she had visited Meghan Markle and newborn son Archie while in London:

While these are great gift ideas... this story is untrue, and I was actually in town for work. I hope whoever this "source" is starts checking their facts more often. https://t.co/S2sDlEiLaZ

Much has happened since then; Harry and Meghan Markle have stepped down from their roles as British Royals in a high-profile exit. They have also had a second child, a daughter named Lilibet after Queen Elizabeth II. Priyanka Chopra has spent the last year in London filming several projects, the latest of which is the buzzy Russo Brothers-made Citadel.

Alaya Furniturewalla Is "Really Happy" To Be In The Maldives. Her Smile Says It All