Priyanka Chopra Dazzles In A Sari At Ambani Party

Stylist Ami Patel shared Priyanka Chopra's pictures, who is a vision to behold in a gorgeous white sari 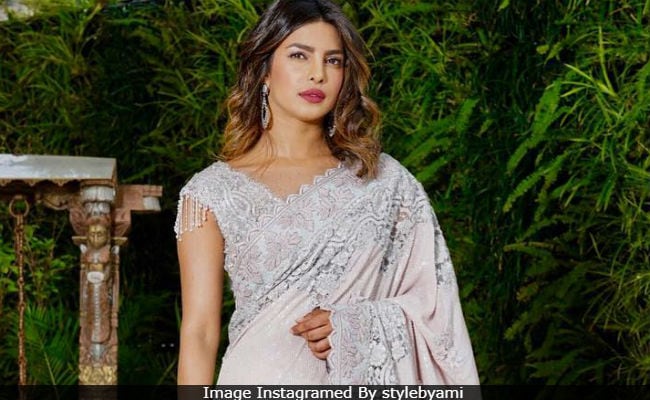 Priyanka Chopra, who returned from Goa just this afternoon, where she was holidaying with rumoured boyfriend Nick Jonas and family, headed out for a party at Nita and Mukesh Ambani's Mumbai home in the evening. The party is apparently their son Akash and Shloka Mehta's mehendi ceremony. Celebrity stylist Ami Patel shared Priyanka's pictures, who is a vision to behold in a gorgeous white sari, from the studios of Tarun Tahiliani. The actress has accessorised her look with a bracelet and earrings. (Wow, Priyanka). Akash and Shloka had exchanged rings in a private ceremony in Goa this March. Later, the Ambanis had thrown a star-studded bash for the couple in Mumbai. Their engagement ceremony will be held on June 30.

Priyanka returned to India from the US, where she was busy with her Hollywood projects, last week and was accompanied by Nick Jonas. After spending a couple of days in Mumbai, the rumoured couple flew to Goa with Priyanka's family, including her cousin Parineeti. Of meeting Nick, Parineeti told NDTV, "It was fun and we had a great trip."

According to several unconfirmed reports, Priyanka and Nick's engagement is also on the cards, which is said to happen between July and August.

Promoted
Listen to the latest songs, only on JioSaavn.com
Priyanka had met Nick Jonas at last year's Met Gala. Reports of their possible romance featured in headlines after Priyanka and Nick were spotted at a yatch party in Los Angeles. Nick also took Priyanka to her cousin's wedding.

Back in India, Priyanka is expected to start filming Bharat.