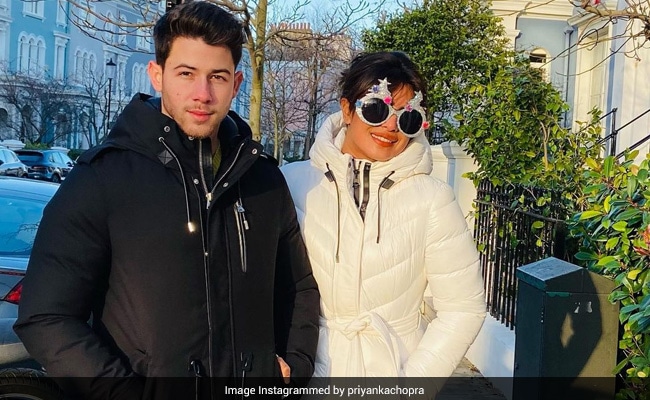 Priyanka Chopra, who was shooting for a project in London, will be celebrating Christmas there along with her husband Nick Jonas. The actress shared a picture of her Christmas OOTD on her Instagram profile on Thursday. In the photograph, Priyanka can be seen smiling with all her heart as she poses with husband Nick Jonas by her side. The actress opted for a pristine white outfit. She accessorised her look with OTT sunglasses. We also got a glimpse of their pet pooch Diana in the picture. Priyanka Chopra's caption for the post was pun at its best. She captioned the post: "Christmas spirit."

On Wednesday, Priyanka posted a super cute throwback picture of herself with her pet dog Panda and she wrote: "Miss you." Take a look at her post here:

The actress also shared a scene from her work diaries in London. In the picture, Priyanka could be seen wearing a face shield. She captioned the post: "What shooting a movie looks like in 2020. Daily testing, face shields, and masks on hand. This was taken after hair and makeup where we wait right before we shoot, in a secure distanced zone ...And masks on...in between all shots! Staying safe is part of getting the job done. Protect yourself and everyone around you. Stay positive! test negative."

In terms of her films, Priyanka Chopra's last project was The Sky Is Pink, co-starring Farhan Akhtar and Zaira Wasim. Her upcoming projects are Netflix's The White Tiger, co-starring Rajkummar Rao. She will also be seen in We Can Be Heroes and a film with comedian Mindy Kaling, Amazon's Citadel and Sangeet Project. The actress recently announced a Hollywood film with Sam Heughan and Celine Dion. She will also launch her memoir Unfinished next month.