Priyanka Chopra And Nick Jonas Can't Decide Who Is More "Lucky." Here's Why 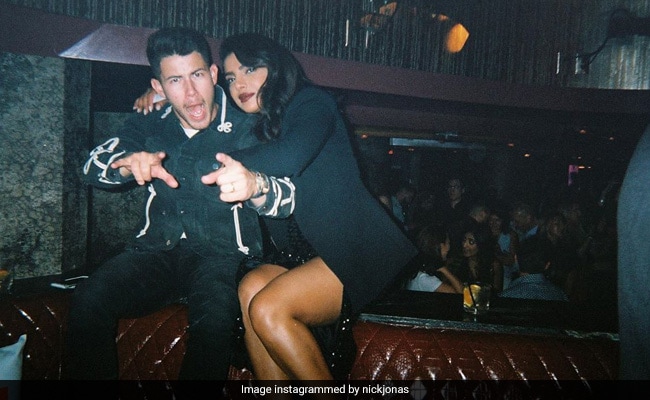 Nick Jonas, in a throwback state of mind, shared a super cute throwback picture of himself along with his wife Priyanka Chopra. The star couple, who often engage in social media PDA, had the cutest Instagram exchange on Sunday. In the picture, Nick and Priyanka, twinning in black outfits, can be seen happily poising for the camera. Nick Jonas captioned the post: "How lucky am I? #flashback," adding heart-eyed emojis. In the comments section of the post, Priyanka Chopra wrote: "My love! I'm the luckiest." How cute. Check out Nick Jonas' post here:

How lucky am I? #flashback 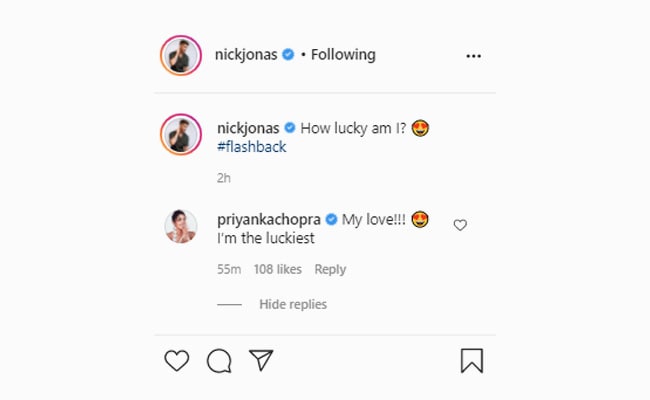 Priyanka Chopra married Nick Jonas in a Christian and a Hindu ceremony in Jodhpur's Umaid Bhawan Palace on December 1 and 2 in 2018. The couple later hosted receptions in Delhi and Mumbai. They first met at the 2017 Met Gala. They frequently share loved-up posts together.

I could stare into your eyes forever. I love you baby. You are the most thoughtful, caring and wonderful person I have ever met. I am so grateful we found one another. Happy birthday beautiful.

My forever guy...so grateful for you @nickjonas

Priyanka Chopra recently unveiled the cover of her memoir titled Unfinished, which will be published by Penguin Random House. In terms of work, Priyanka Chopra was last seen in The Sky Is Pink with Farhan Akhtar and Zaira Wasim. The actress has many projects lined-up, which include Netflix's adaptation of Aravind Adiga's Booker Prize-winning novel The White Tiger, co-starring Rajkummar Rao. She will also be seen in We Can Be Heroes and a film with comedian Mindy Kaling. The actress also signed Amazon's Citadel and Sangeet Project. The actress recently announced a Hollywood film with Sam Heughan and Celine Dion.

Nick, along with his brothers Joe Jonas and Kevin, are a part of the famous musical band Jonas Brothers. The band became a household name after they made appearances on the Disney channel. Nick, Kevin and Joe started the band in the year 2005 and they featured in the Camp Rock films. They were also a part of the Disney series titled Jonas. Nick Jonas has also starred in Jumanji: Welcome To the Jungle, Jumanji: The Next Level, and Goat. He will next be seen in Chaos Walking.