Priyanka Chopra And Brother Siddharth Celebrate Raksha Bandhan Together After 5 Years. Guess Where

"Also #HappyRakhi to my army of brothers!" wrote the actress 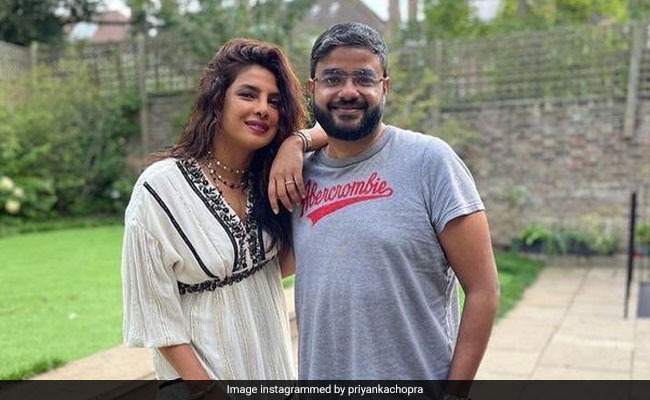 Raksha Bandhan this year is quite special for Priyanka Chopra. She celebrated the festival with her brother Siddharth by her side after five years. On Sunday, Priyanka Chopra shared a set of pictures of herself, brother Siddharth and mom Madhu Chopra from London and wrote: "First time together in 5 years on Raksha Bandhan! Love you lil brother Siddharth. Also #HappyRakhi to my army of brothers! Sending love and rakhis wherever you are...expecting my gifts soon too - Love, Mimi." The actress, who has been filming her new series Citadel in London since last year, looks pretty in a white outfit in the pictures. She can be seen tying a rakhi to Siddharth in one of the photos.

Priyanka Chopra has been updating her London diaries with some stunning and also some adorable photos of herself. Most of them feature her basking in the sun. Take a look:

Priyanka Chopra recently announced her new project and took the Internet by storm. She will be seen alongside Katrina Kaif and Alia Bhatt in Farhan Akhtar's Jee Le Zaraa- his new film about a road trip. Earlier this month, Priyanka Chopra shared a photo with Katrina and Alia and wrote how it took them 3 years to align their schedules for this grand movie and how special it is for them. She wrote: "Let's rewind, to me musing about wanting to do another Hindi movie ASAP, on an unusually rainy night in Mumbai in Nov 2019. But it had to be the right one - different, cool, never been done before... I thought. The idea grew into a movie helmed by an all-female cast. There are not enough Hindi movies that are female multi-starrers. This led to an impulsive phone call... to my 2 real friends about this idea that involved 3 on-screen girlfriends. A celebration of friendship we called it!"

"Katrina, Alia, and I enthusiastically met in February 2020 (as seen in this picture), just before the world shut down, to discuss who we could trust to bring this vision to life for us and our choice was unanimous... Farhan and Ritesh, Zoya and Reema. We had all worked with Excel Movies and Tiger Baby Films individually so this seemed perfect. It just so happened that Farhan was working on a female road trip movie at the same time! Talk about all the stars aligning! And here we are today... #JeeLeZaraa... it only took 3 years to align all our schedules but we stuck together and got it done! This one is to sisterhood... to friendship and to breaking the mould!! Can't wait to get on the road with Aloo and Katty. My heart's smiling. See you at the movies," she added.

Priyanka Chopra was at her home in California for a couple of days in June. She travelled back to London to resume work earlier this month. Citadel is a multi-series with productions from India, Italy and Mexico and directed by The Russo Brothers.