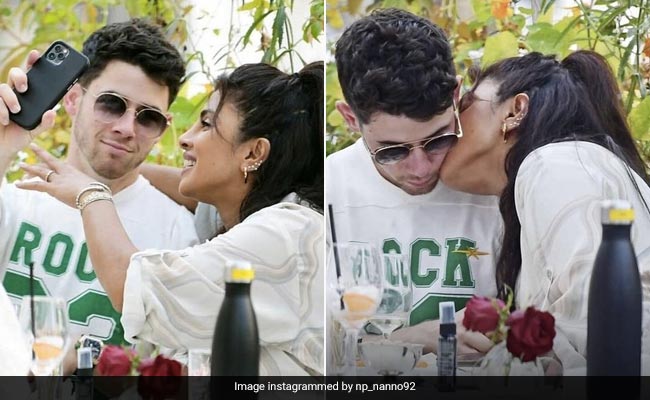 Priyanka Chopra and Nick Jonas, reunited in London, are painting it red. The couple recently stepped out on a lunch date and glimpses of their PDA at the London eatery are giving the Internet life. From the viral photos, it appears that Priyanka Chopra and Nick Jonas had a luncheon at Notting Hill's Beach Blanket Babylon restaurant. They were also joined by Priyanka Chopra's mom Madhu Chopra at the eatery. For her lunch date with Nick Jonas, Priyanka opted for a printed jumpsuit, styled with chunky sneakers, some statement gold accessories and tan sunglasses. As is trend, Priyanka Chopra looked effortlessly chic as she walked around Notting Hill, hand-in-hand with Nick Jonas.

Here are some of the viral photos shared by fan clubs dedicated to the couple. Here's how Priyanka Chopra and Nick Jonas painted the town red:

📸| @priyankachopra at a restaurant with Sandra Oh, Michelle Yeoh, Awkwafina, Paul Feig and his Wife tonight in London pic.twitter.com/GkLPuHxhDy

Earlier this month, Nick Jonas flew into London to be with Priyanka Chopra, where she has been for the shooting schedule of her next project Citadel. Priyanka's excitement at having been reunited with Nick Jonas spilled on to Instagram as she shared this post: "He's home."

In terms of work, Priyanka Chopra recently announced a road trip movie with Alia Bhatt and Katrina Kaif - it will be directed by her Dil Dhadakne Do co-star Farhan Akhtar. Priyanka's line-up also includes Text For You, Citadel, a wedding comedy with Mindy Kaling and the fourth Matrix movie. Nick Jonas currently appears as a coach on reality TV show The Voice.