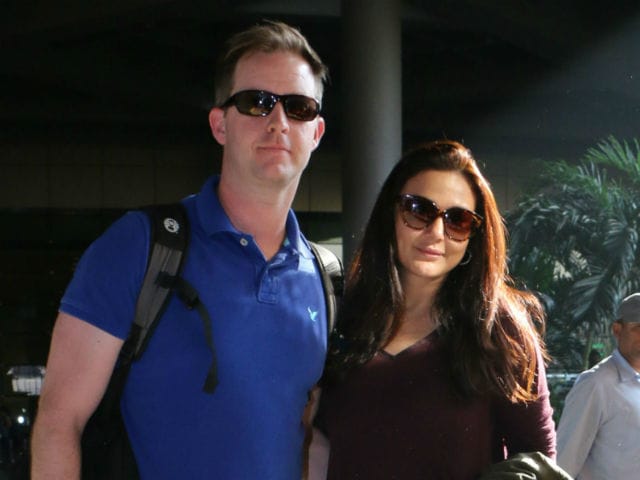 New Delhi: Actress Preity Zinta is set to make a comeback to the big screen this year. The 42-year-old actress had a cameo in the 2014 film Happy Ending and her last full-fledged role was in 2013 film Ishqk in Paris. The Kal Ho Naa Ho actress told news agency IANS that she had decided to discontinue her journey in Bollywood after marriage but her husband Gene Goodenough pushed her back in to doing films. Preity Zinta will be seen in Neerraj Pathak-directed Bhaiyyaji Superhitt opposite Sunny Deol. The Dil Se actress told IANS that she considers herself lucky to have a partner like Gene Goodenough. Of maintaining a balance between her personal and professional life, Preity told IANS: "I am happy and lucky that I am married to somebody who pushed me back into doing a movie... Because I thought I don't want to do any more films and I moved to the business side of life."

The actress also added that being a housewife is the toughest job. "Because you get no appreciation and you have to work 24x7 and you never get time off. So people like us, who are professionals, we get that kind of gratitude from our work space. I think women in general are super women, because they always do two jobs. If they are married, they take care of home and on professional front they work," Preity told IANS.

Preity Zinta who is awaiting the release of her film Bhaiyyaji Superhitt told IANS that she doesn't feel any pressure. "There is absolutely no pressure because I'm not producing it. I don't have any stress. I think it's okay. If you look at any actor in their entire career, whenever they have had their first production, they have all fallen flat because you go all over the place... which is fine because I'm still very proud of my film (Ishkq in Paris which she produced)," the actress said.

Preity said Bhaiyyaji Superhitt is a special film for her as she has never played an 'earthy character' before. Preity Zinta also spoke to IANS over the women centric films being made these days. "I don't think there are woman-centric films. I think there is a great story. If you look at my first film Kya Kehna, then you will say it was a woman-centric film. I don't look at it like that... I think a great story is very important," she said.

The Kya Kehna actress added having a positive message in a movie is as important as entertainment. "I also feel that entertainment is fun, but it's always good when a lot of people watch movies, they get very influenced by movies," Preity told.

Promoted
Listen to the latest songs, only on JioSaavn.com
Preity Zinta married Gene Goodenough at a private ceremony in Los Angeles on 29 February, 2016.