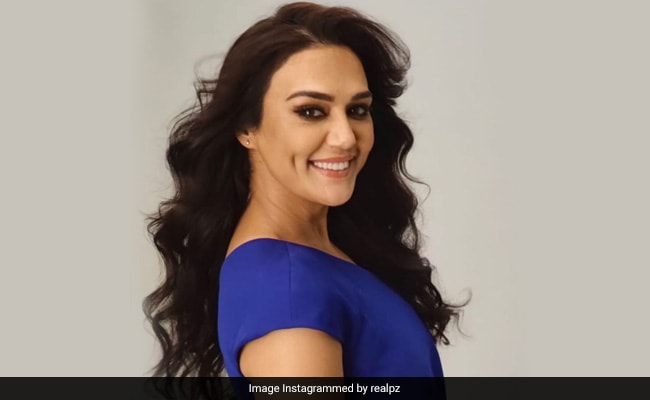 Can you guess what Preity Zinta's  favourite exercise is? No, it is not pilates or pushups. The actress revealed her pick on Instagram and it has left us all grinning. Preity shared a behind-the-scenes image from a recent shoot on the photo-sharing app. And in the caption of the image, the Dil Se actress revealed that smiling was the one exercise she loves most. She wrote, "Smiling is my favourite exercise" and dropped a red heart.  And given her famous dimples, we are glad that Preity picked smiling. As expected, fans couldn't stop praising Preity Zinta's picture in which she looked stunning.

Celebrity stylist and entrepreneur Aastha Sharma commented with a red heart. A fan called Preity the “dimple queen" while another user was all praise for Preity's eye makeup and her thick tresses. One even referred to Preity's popular movie Kal Ho Na Ho and wrote, "Yeah, we know Kal Ho Na Ho mein Shah Rukh taught you, right?"

However, smiling isn't the only exercise that Preity Zinta likes to do. From the posts that she shares on Instagram, we know Pretty hits the gym too. And, we were thrilled to see Preity pull off some tough pilates moves effortlessly. In one video, we see her nailing her workout regime with celebrity trainer Yasmin Karachiwala guiding her. The caption read, "Back to Pilates with Yas." Thanks for the workout inspiration, Preity.

Given that she is an avid traveller, it is no surprise that Preity Zinta has been visiting several beautiful places lately. Earlier, she was seen spending time in Ladakh and, then, holidaying with her family in Shimla only a few days ago. In a video, Preity even showed us a large apple orchard that belongs to the family. Preity mentioned in her caption, "Going back home to our family farm during apple season after so many years was an emotional and exhilarating experience." Preity even enjoyed making several glasses of fresh apple juice. Here's her post:

Preity Zinta spends most of her time in Los Angeles with her husband Gene Goodenough. But she also does make regular visits to India. Preity was last seen in the 2018 Bollywood film Bhaiaji Superhit. She also appeared in one episode of the hit ABC series Fresh Off The Boat.