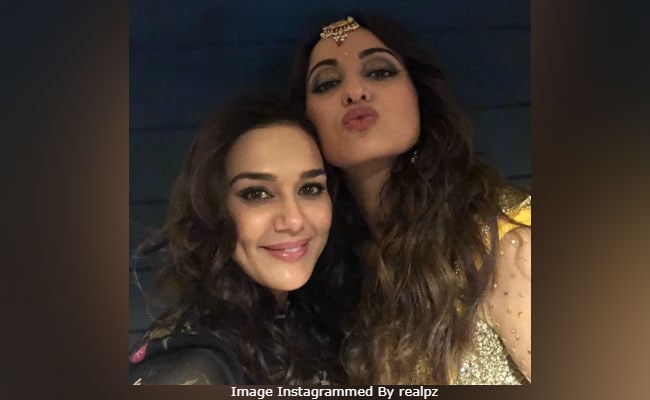 Preity Zinta never fails to treat us to some wonderful pictures from her outings. Recently, she seems to have dropped by at Salman Khan's Dabangg Reloaded Tour stop (Los Angeles) and shared a picture with Sonakshi Sinha, from the backstage while she's now busy shopping with Jacqueline Fernandez. Sonkashi and Jacqueline are part of the Dabangg Reloaded Tour, which is happening in the US. "Always a pleasure to see the stunning and vivacious Sonakshi Sinha in action at the Dabangg Reloaded Tour" she captioned the picture with the Akira actress while for Jacqueline, Preity wrote, "Girls just wanna have fun. Here is Jacqueline Fernandez and yours truly, striking a pose with our new sunglasses."

Preity Zinta shuttles between India and the US, where she currently lives with husband Gene Goodenough. The couple married in 2016.

Promoted
Listen to the latest songs, only on JioSaavn.com
About a month ago, Preity had shared an epic throwback picture from 2004's Temptation Tour, in which she had paired with Shah Rukh Khan, Priyanka Chopra, Rani Mukerji, Saif Ali Khan and Arjun Rampal.

And, for Salman, she posted this some weeks ago.

Salman Khan was last seen in Race 3, which also starred Jacqueline and Daisy. The film has made over Rs 130 crores at the box office.