It appears that Preity and Salman were on a vacation in Goa with friends, when this photo was clicked 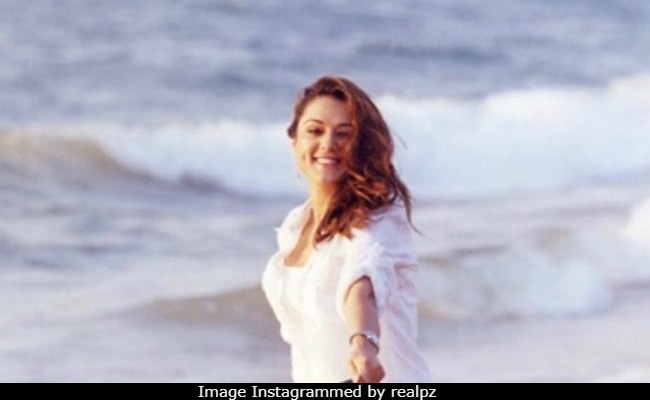 New Delhi: "Hey Salman Khan, you will never guess what I found! Remember this?" Instagrammed Preity Zinta as she shared a photo of herself with Myson - Salman Khan's pet bull mastiff, who died in 2009. In the throwback post, Myson can be seen accompanying Preity to a run on the beach. It appears that Preity and Salman were on a vacation in Goa with friends and had a blast with no paparazzi around (read the hashtags on her photo for more details). Salman Khan's pet dogs - Myson and Myjaan - died in the same year, after which the 52-year-old superstar constructed a memorial for his dogs near Galaxy Apartments - on the traffic Island near Mehboob studio.

Promoted
Listen to the latest songs, only on JioSaavn.com
Preity Zinta and Salman Khan have famously co-starred in films such as Har Dil Jo Pyar Karega..., Jaan-E-Mann and Chori Chori Chupke Chupke. Apart from their films together, they are great friends IRL. Earlier this year, Preity Zinta flew into Jodhpur to meet Salman Khan, who at that time was in Jodhour Jail after he was declared guilty of killing endangered blackbucks 20 years ago. Preity Zinta was also one of the first celebrities to have visited Salman Khan's Mumbai home after the actor was convicted in a 2002 hit-and-run case in July 2015.

Last seen in 2013's Ishkq In Paris, Preity Zinta's much delayed Bhaiyyaji Superhitt will now release on September 14. Salman Khan will be seen in Race 3 at the theatres this Friday.
Comments
salman khanpreity zinta