Preity Zinta's throwback picture is from the sets of Veer-Zaara 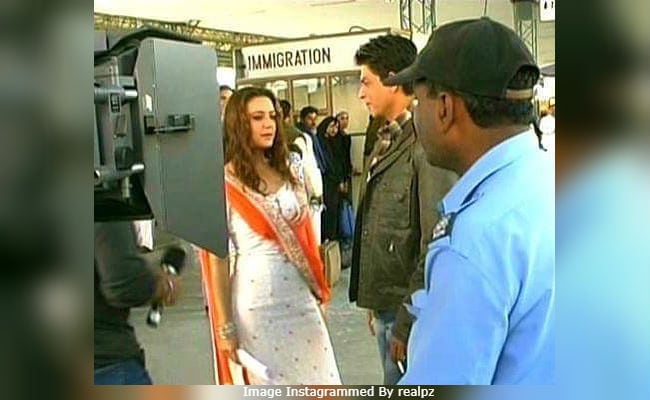 New Delhi: Yes, it's Thursday and like every week, Preity Zinta has dug out another epic throwback picture and, of course, Shah Rukh Khan is there too. This time, the picture is from their 2004 blockbuster film Veer-Zaara, when they were shooting in Amritsar. Remember the emotional scene where SRK drops Preity to the railway station after her stay in India? The picture appears to be taken during that time. "Just like Veer-Zaara, my love story also leads me through the immigration route," Preity captioned the post. (It is in reference to her real life as she shuttles between India and the US). Preity is married to Gene Goodenough, who is based out of the US.

In Veer-Zaara, SRK player Veer, an Indian army officer, who falls in love with Zaara (Preity), a Pakistani. The film was directed by Yash Chopra and was hugely successful at the box office. Rani Mukerji was also part of the film.

Last Thursday, she had shared this.

Some days ago, she had shared a picture from Dil Se sets.

Apart from Veer-Zaara, Shah Rukh and Preity have worked together in hit films like Kal Ho Naa Ho and Kabhi Alvida Naa Kehna. SRK was Preity's first male co-star when she debuted in Dil Se (1998).

Promoted
Listen to the latest songs, only on JioSaavn.com
Meanwhile, Preity Zinta is back to California and Instagrammed a picture with her 'pati parmeshwar.'

Good to be back with my other half in sunny California Time to unwind & chill a little. #Patiparmeshwar #happiness #jetlag #california #selfie #love #ting

For over a month, she was busy with the Indian Premier League (IPL) tournament, in which her team Kings XI Punjab was playing. SRK's Kolkata Knight Riders was also a part of the IPL.
Comments
Preity ZintaPreity Zinta throwback picshah rukh khan