"You're the reason I look down at my phone and smile," wrote Preity Zinta 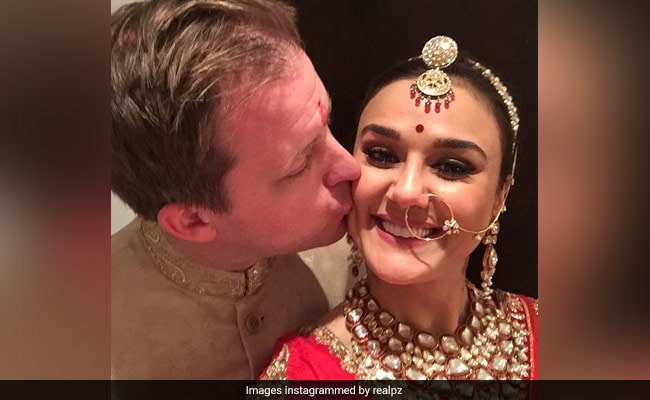 Preity Zinta might be away from her husband Gene Goodenough on their wedding anniversary but she made up for it by sharing a super cute post for him. In her note for Gene, Preity wrote that he is the reason that she looks down at her phone and smiles. She began the note by writing: "Happy Anniversary my love. You're the reason I look down at my phone and smile and then walk into a pole." She added, "Cannot believe we clocked a decade together. How time flies ... Miss you.... Wish you were here." She added the hashtags #5years, #Happyanniversary, #Hubby, #Love, #29feb and #ting to her post. In the throwback picture, the couple can be seen posing with snowcapped mountains in the backdrop.

The actress got married to Gene Goodenough on February 29, 2016 and she moved to Los Angeles. However, she keeps visiting India. The actress loves to go big on festivals. Be it Diwali, Halloween, Karwa Chauth, Christmas or Thanksgiving. She shares loved-up pictures with her husband from the festivities. Take a look at some of the posts shared by the actress here:

Preity Zinta is best known for her performances in films such as Dil Se, Lakshya, Salaam Namaste, Kal Ho Na Ho, Veer-Zaara and Dil Chahta Hai among many others. The actress was last seen in Bhaiaji Superhit, which released in 2018. She also featured in a small role in ABC series Fresh Off The Boat in one episode.