After the 'Temptation Tour' picture, Preity Zinta shared another picture with her besties 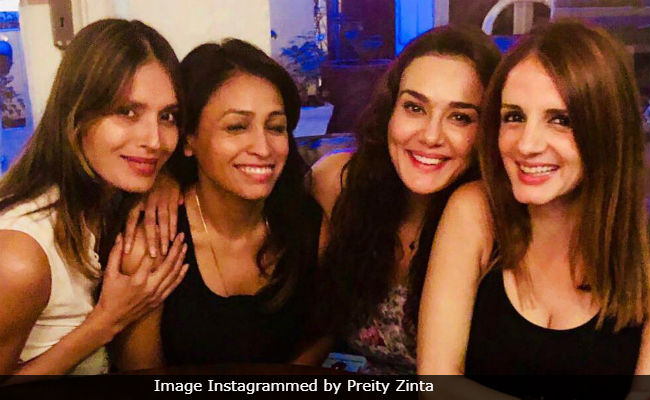 New Delhi: Preity Zinta's latest Instagram post with her besties is giving us major friendship goals. In the picture, Preity poses with interior designer Sussanne Khan, supermodel Ujjwala Raut and fashion designer Surily G. Too much talent in one frame, we must say. Preity Zinta shared the picture with her 3.5 million followers on Instagram, of which over 58,000 liked it. The 43-year-old actress captioned the post: "I instantly brighten up when I'm hanging with my girl crew." She used hashtags like "#aboutlastnight," "#girlpower" and "#bestiesforever." Sussanne Khan and Ujjwala Raut also shared similar pictures on their respective Instagram accounts.

The Veer Zaara actress shares throwback pictures on social media, every Thursday and yesterday was not an exception. Preity treated her fans with a million dollar picture, comprising Bollywood's biggest stars. The picture that featured Shah Rukh Khan, Priyanka Chopra, Arjun Rampal, Saif Ali Khan and Rani Mukerji was taken during the 2004 Temptation Tour. Along with the post, she wrote: "Those were the days when there was no social media and we all liked each other. Today we like each other's comments but hardly have time to hang out like this."

Promoted
Listen to the latest songs, only on JioSaavn.com
This is the post we are talking about.

Preity Zinta married her long-time American boyfriend Gene Goodenough in 2016 and was last seen in Welcome To New York, in which she did a cameo appearance. She made her debut in the 1998 film Dil Se and has delivered many hits like Koi...Mil Gaya, Dil Chahta Hai, Soldier among others. She is also the co-owner of IPL cricket team Kings XI Punjab.