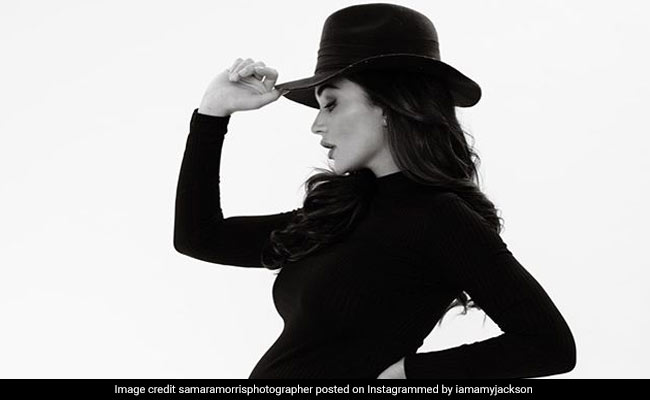 Actress Amy Jackson is here to stun you with her pregnancy photoshoot pictures. The 27-year-old actress, who is in her final trimester of pregnancy, Instagrammed two black and white clicks of herself styled in a thigh-high slit bodycon dress to channel her working mom mode and captioned them like this: "Wurrrkin mamma. Thrilled to bits with these images from this fabulous female photographer Samara Morris." Amy Jackson's pregnancy glow is unmissable as she poses with a felt hat and lets her gorgeous baby bump do the talking. The photographer aptly described Amy as the "pregnant goddess": "Sneak peek from shooting the gorgeous Amy Jackson and her beautiful baby bump. Such a pleasure to be the first photographer to shoot this pregnant goddess."

Actress model Lisa Haydon was one of the first ones to cheer for Amy Jackson's photoshoot on her Instagram: "Uff, holy smokes," she wrote. Amy Jackson's friends and followers are also equally thrilled, who posted comments such as: "You're unreal", "so stunning", "so beautiful" and "wow". "Oh, Amy," wrote actress Esha Gupta.

Sneak peek from shooting the gorgeous @iamamyjackson and her beautiful baby bump. Such a pleasure to be the first photographer to shoot this pregnant GODDESS @rosiecerosiomakeup / hair @sandydmakeup / studio @poutprofiles.london. #babybump #maternityphotography #model #photographer #amyjackson

Amy Jackson and fiance George Panayiotou dropped the pregnancy news with an adorable announcement in March. The actress has trended a great deal for some of her interesting pregnancy posts - one of which is about road tripping in Europe when six months pregnant.

@cash_and_rocket what an adventure!! People thought I was crazy doing a road trip across Europe at 6 months pregnant but it was such an amazing experiences. As a mum to be, the @cash_and_rocket movement is something that's very close to my heart and I wanted to do everything possible to help other mothers (and their babies) who are not as fortunate. I've met incredible women on this trip and made friendships that will last a lifetime - @zaramartin thankyou for being my lil , we've gone from saying Hi at work doo's to spending a straight 72 hours together and I couldn't have asked for a better ride or die copilot. @jbrangstrup thankyou for EVERYTHING you do, you're a very special human. You inspire us everyday and if I'm even half as wonderful a mum as you, I'll be happy! #WIESMANN YOU ROCKKK!! I've never driven such a stunning car - powerful but so safe! #TEAM37 smashed the last leg to Monte Carlo, I'm so sad I wasn't there but family comes first back to LONDON! And a HUGE THANKYOU to @jaymclaughlin for capturing us along the way

Here are some of Amy Jackson's pregnancy-special posts.

Game Face the battle I have every morning about whether I should go to the gym OR eat a bowl of honey #cravings #26weekspregnant | GYM every/ most of the time. @aloyoga always.

Amy Jackson made her acting debut with 2010 Tamil movie Madrasapattinam and has featured in several Telugu and Kannada projects. Singh Is Bliing and Freaky Ali are some of the Bollywood movies she's starred in. Amy was last seen in Rajinikanth's robot drama 2.0, co-starring Akshay Kumar, with whom she's shared screen space before.