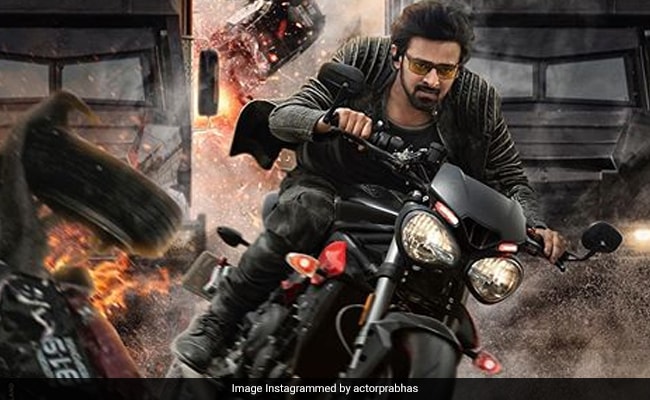 Prabhas and Shraddha Kapoor released the official teaser of their upcoming film Saaho on Thursday and it stole the show on the Internet in no time. Those who loved the teaser reviewed it on social media including celebrities such as Nagarjuna Akkineni, Rana Daggubati, director SS Rajamouli, actress Tamannaah Bhatia, south actors Akhil Akkineni, Siddarth and Vijay Deverakonda among others. Nagarjuna tweeted about the teaser and wrote: "Saaho to Prabhas and UV Creations for pushing the bar!" Rana Daggubati, who has worked with Prabhas in the Baahubali series, wrote on his Twitter profile: "Here it is the Prabhas' mighty Saaho... Well some UV Creations and Sujeet and Shraddha! Can't wait."

SS Rajamouli, who directed Prabhas in Baahubali, wrote: "UV Creations justifying the budget and Sujeeth justifying his responsibility... Terrific teaser of Saaho.. Strength of Prabhas is that he is macho yet endearing... And of course a darling."

Check out their reactions

SAAHO to prabhas and @UV_Creations for pushing the bar!! #SaahoTeaser

Here it is the PRABHAS' MIGHTY SAAHO #SaahoTeaserhttps://t.co/dyNwXEgnzw Well some UV and Sujeet and Shraddha!! Can't wait

UV justifying the budget and Sujeeth justifying his responsibility..Terrific teaser of #Saaho.. Strength of Prabhas is that he is Macho yet endearing..
And ofcourse a Darling.. #SaahoTeaserhttps://t.co/F0ZT16LDj0

Calling #SaahoTeaser grand would be an understatement! Love it and can't wait for it. Best wishes to #Prabhas@ShraddhaKapoor and the entire team! https://t.co/j8W7hgu27P

Here's what other celebrities said about the teaser:

The energy of Telugu! The energy of Saaho! And the energy of the one and only Prabhas!!!!!!! #Saaho for the win! Mindblowing visuals! Fire all the way https://t.co/x8VVjtwDt5

Mind = Blown#Saaho looks like an action magnum opus! #Prabhas is

And this is young Sujeeth's second film. Whattey wow!
All the best to the whole team. Really excited about this one. Violent #DieHardFans gurinchi thelisindhega:)

#Saaho
Super excited to watch Prabhas Anna on the big screens @UV_Creations deserve a massive blockbuster for the heart they've put in this.https://t.co/FiV4jVStTjhttps://t.co/L3jboNlGsA

In case you missed Saaho teaser, check it out now:

Saaho, directed by Sujeeth and produced by UV Creations, marks Shraddha Kapoor's debut in the Telugu film industry. The film, which will release in Hindi, Tamil and Telugu, also features Mandira Bedi, Jackie Shroff, Neil Nitin Mukesh and Arun Vijay in pivotal roles. Saaho will release on August 15 this year.