"Are you ready to ride into the world of Saaho," wrote Prabhas 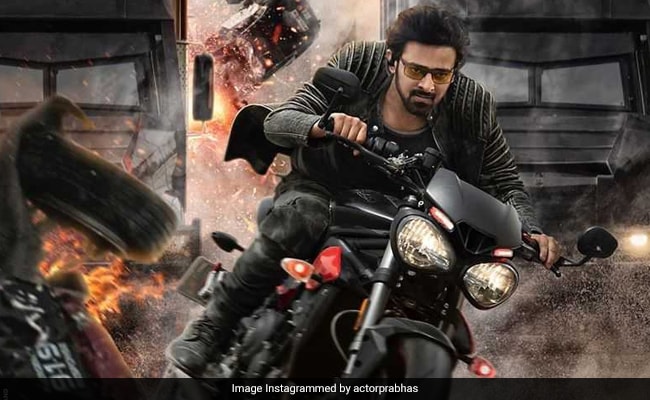 Prabhas shared a brand new poster of his forthcoming film Saaho on his Instagram profile on Wednesday along with the reminder that the film's teaser releases tomorrow. In the brand new poster, the 39-year-old actor can be seen seated on a bike. Dressed in a black leather jacket and matching trousers, Parbhas can be seen wearing a pair of sunglasses and the expression on his face is intense. Sharing the film's poster on social media, Prabhas wrote: "Hey Darlings... Only 1 Day to go, are you ready to ride into the world of Saaho. Teaser out tomorrow at 11.23 AM." The poster of Saaho received over 5 lakh likes on Instagram within a few hours.

Take a look at the poster of Saaho here:

A few days ago, the makers of Saaho shared a poster which featured the film's lead actress Shraddha Kapoor. In the poster, Shraddha could be seen pointing a gun at the camera. Prabhas shared the poster on Instagram and he wrote: "Hey Darlings, enter the world of Saaho with the teaser on June 13."

This is the poster we are talking about:

Saaho is slated to release in Hindi, Tamil and Telugu and it will clash with Akshay Kumar's Mission Mangal and John Abraham's Batla House at the box office. All the films are scheduled to release on Independence Day this year.