Please Give Shilpa Shetty's Son, 4, An Oscar. He Has A Speech Ready 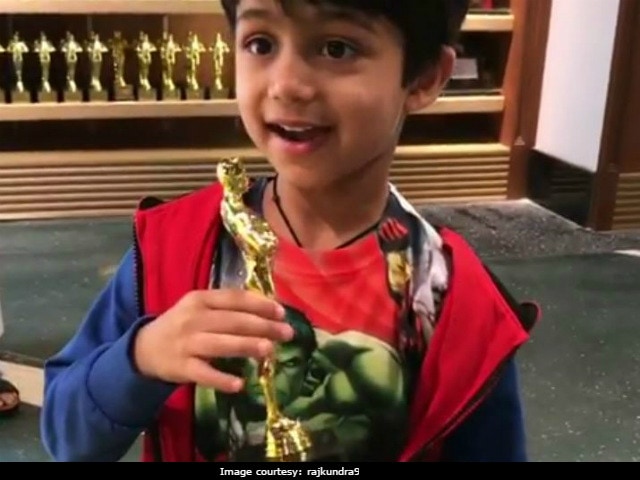 Oscars 2017: Shilpa Shetty's son Viaan in a still from the video shared on Instagram

New Delhi: The Oscar fever has hit Bollywood and trickled down to the youngest generation of the star families. Actress Shilpa Shetty's four-year-old son seems particularly motivated to win a golden statuette and deliver a cute Oscar speech. That is exactly what he did during his trip to Dubai with father Raj Kundra. Ahead of the Oscars, Raj Instagrammed a video, in which Viaan can be seen rehearsing his acceptance speech for the Oscars. Viaan mentions his "mom and dad" in the speech, which is the most adorable thing you might come across today. Viaan was spotted holding a toy version of the Oscar at Legoland, where he was presumably hanging out with his father. Raj, who Instagrammed the video earlier last week, wrote: "My son preparing for his Oscar speech for Oscars 2017 weekend."

"It's a really nice time and I win this trophy. I wanted to give this to my mom and dad. So, let me give it," Viaan can be heard saying.

Viaan is actually on an all-boys trip to Dubai with his father and grand-dad but there's no Shilpa Shetty. Raj explained the situation: "Missing Shilpa Shetty who's away for 14-day work trip. Longest we have been apart since marriage!"

Grandad-Son-Father #boystrip to Dubai. Missing @officialshilpashetty whose away for 14 days work trip longest we have been apart since marriage!! Anyways #DadMode dreading Viaans Poo time

Promoted
Listen to the latest songs, only on JioSaavn.com
Meanwhile, Shilpa is sharing updates about her work schedule on Instagram.