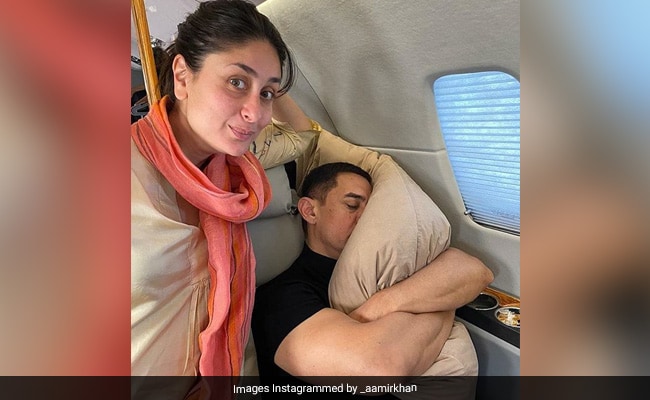 If there is any such thing as co-star goals, Aamir Khan and Kareena Kapoor's names should be on the top of the list, especially after their latest Instagram exchange. Kareena Kapoor, who recently made her Instagram debut, is making every post count ( in this case, Aamir's birthday wish). On Saturday, Kareena posted a super cute picture with her Laal Singh Chaddha co-star Aamir Khan and his beloved pillow. In her post, Kareena described Aamir's pillow as her "favourite co-star." Aamir, who might have been a few days late in reacting to Kareena's post, came with one helluva response. The actor shared the same picture on his Instagram profile and he wrote: "Aye! Pillow pe mat jaana! Pillow pe mat jaana!" LOL!

Aamir Khan shared a still of Kareena Kapoor from the film on Valentine's Day, this year and he wrote: "Happy Valentine's Day Kareena. I wish I could romance you in every film... Comes naturally to me." This is the post we are talking about:

#HappyValentinesDay Kareena. I wish I could romance you in every film... comes naturally to me ;-) Love. a.

Aamir Khan announced the project on his birthday in March, last year. The filmLaal Singh Chaddha, is a remake of the 1994 film Forrest Gump, which featured Tom Hanks in the lead role. The film is being directed by Secret Superstar director Advait Chandan and it has been written by Atul Kulkarni. Laal Singh Chaddha is collaboratively being produced by Aamir Khan Productions and Viacom 18 Motion Pictures. .Thugs Of Hindostan remains Aamir Khan's last project.

Kareena Kapoor, who starred with Aamir in films like 3 Idiots and Talaash, was last seen in Angrezi Medium, co-starring Irrfan Khan and Radhika Madan. She will next be seen in Karan Johar's period drama Takht.