"My fav co-star has to be Aamir Khan's... pillow," Kareena captioned her post 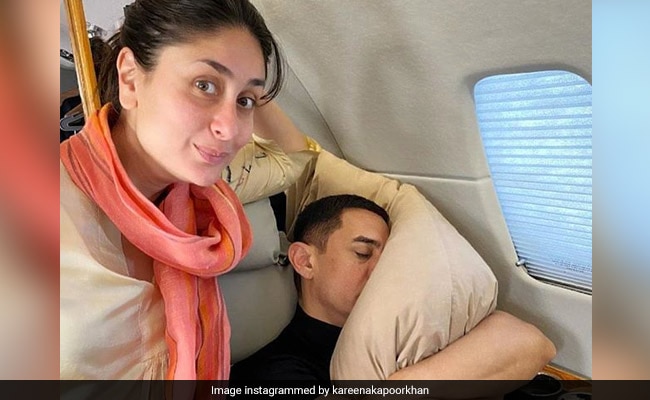 Kareena Kapoor wished Aamir Khan on his birthday with a typically Kareena Kapoor post. Kareena, who made her official debut on Instagram only recently, was up to some mischief when Aamir dozed off on a flight. Aamir and Kareena were spotted greeting each other at Mumbai's private airport on Thursday. The actors flew out of Mumbai for the next schedule of their upcoming movie Laal Singh Chaddha. Kareena's photo of Aamir appears to be from that day, when Aamir decided to take a nap on board. Remember how Aamir Khan never travels without his flight pillow? So, looks like Kareena took a selfie when Aamir got some shut eye and reserved it for his birthday.

Kareena's birthday post for Aamir came with a cheeky caption: "My fav co-star has to be Aamir Khan's... pillow!"

In February, Aamir Khan posted the sweetest valentine for Kareena:

. #HappyValentinesDay Kareena. I wish I could romance you in every film... comes naturally to me ;-)
Love.
a. pic.twitter.com/dafeyspkac

Kareena and Aamir are reuniting on the big screen after 2009's 3 Idiots and 2012 thriller Talaash. Laal Singh Chaddha is the Hindi remake of Tom Hanks' Forrest Gump. The film is much awaited because it will be his first release after the box office debacle of Thugs Of Hindostan. Laal Singh Chaddha is being helmed by Advait Chandan, who has directed Aamir in films such as Taare Zameen Par and Secret Superstar.

Laal Singh Chaddha is all set for a Christmas 2020 release. Akshay Kumar recently rescheduled his film Bachchan Pandey from Christmas to January 2021 to avoid a box office clash.