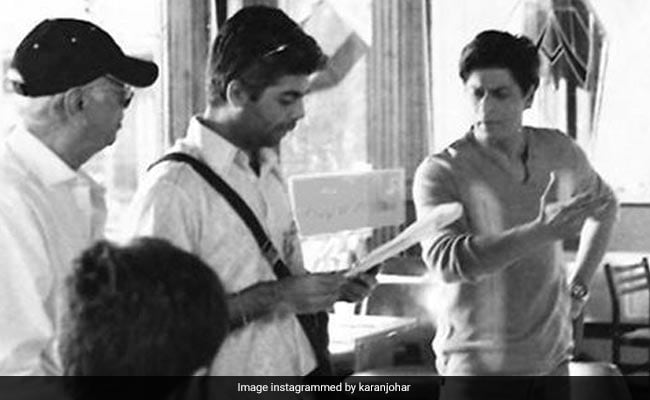 Karan Johar is celebrating 19 years of Kal Ho Naa Ho, starring Shah Rukh Khan, Saif Ali Khan and Preity Zinta in the lead. The filmmaker shared an emotional post on his Instagram handle, expressing why the film holds a special place in his heart. In the post, he also remembered his father, Yash Johar, who was the producer of the film. He shared a series of pictures from the set featuring Shah Rukh, Saif and Preity. The first image is a monochrome picture of KJo and Shah Rukh preparing for a scene. In the second image, we can see Saif and Preity happily posing for the camera. In the third image, we can see Shah Rukh holding a camera while Karan poses. The fourth image shows Karan and director Nikhil Advani. In the last image, Kjo is posing with a child actor Athit Naik, who played the role of Preity's brother.

Along with the photos, he wrote a note that read, "An entire lifetime of memories, in a heartbeat! This film gave so much more than just that - it gave me joy, unbreakable bonds, a different lens for story telling and of course - the last film set I could be on with my father. And for that, I will forever be grateful to this film!," followed by a heart emoticon.

Soon after Karan Johar shared the post, fans flooded the comment section. A user wrote, "Love love love one of the best film," while another wrote, "Except love have nothing to say about this movie. Thank you karan sir for giving us this. My favorite movie for lifetime."

Meanwhile, on the work front, Karan Johar is returning as a director after six years with Rocky Aur Rani Ki Prem Kahani, starring Alia Bhatt and Ranveer Singh in the lead. The movie also stars Jaya Bachchan, Shabana Azmi and Dharmendra in pivotal roles. The movie will release next year on April 28.

Fans Celebrate The Release Of Pathaan Outside Delhi Theatres