The actress, who was last seen in recently-released web-series Tandav, flew to Rajasthan earlier this week with her husband for a quick getaway 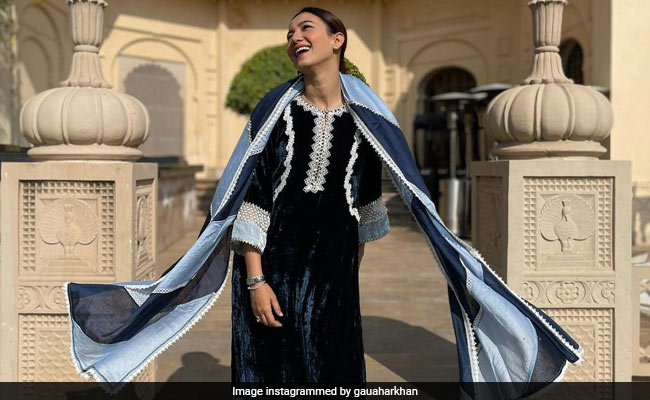 Gauahar Khan is making memories with husband Zaid Darbar on their "first mini holiday" in Udaipur after their wedding. The actress, who was last seen in recently-released web-series Tandav, flew to Rajasthan earlier this week with her husband for a quick getaway. She has been sharing pictures and videos from her trip on her Instagram profile and her latest post shows her making the best use of Udai Mahal's mesmerising ambience for a nice photoshoot. Dressed in a blue outfit by Mulmul, the actress can be seen happily posing for the camera at the palace. "#Musafir #Udaipur first mini holiday after being Mrs," she wrote in the caption.

On Monday, Zaid Darbar shared the first set of pictures from their vacation. "Finally, our time," he captioned the photos, in which he can be seen posing with Gauahar at the Mehrangarh Fort. Take a look:

Wanna know how happy Gauahar Khan is on her first holiday with her husband? See her recent post here:

Gauahar Khan and Zaid Darbar got married on December 25 in Mumbai. After a beautiful nikah ceremony on Friday afternoon, they hosted a grand reception. The actress's bridal outfit was an ivory-hued Sharara from the shelves of designer Saira Shakira. She wore a red and gold Manish Malhotra lehenga on her reception. Check out pictures from her wedding festivities here:

In terms of work, Gauahar Khan's web-series Tandav, headlined by Dimple Kapadia and Saif Ali Khan, released on Prime Video last week. Gauahar has featured in films like Rocket Singh, Game and Ishaqzaade. She is also known for participating and winning the seventh season of reality show Bigg Boss.

Khushi Kapoor Will Make Her Bollywood Debut. Dad Boney Won't Launch Her Though