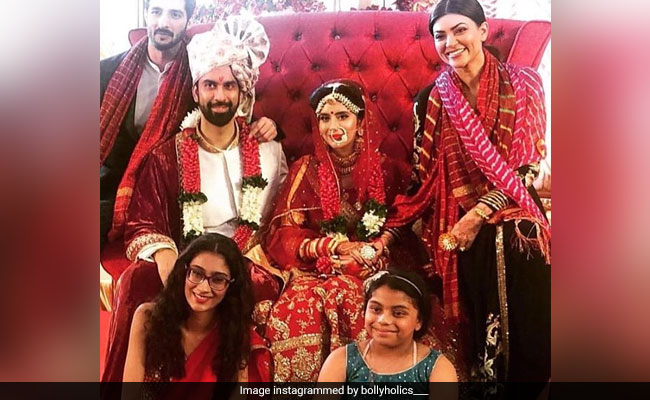 Sushmita Sen's brother Rajeev Sen and television actress Charu Asopa's wedding celebrations in Goa wrapped with a traditional Bengali wedding ceremony on June 16. The couple posted pictures from the wedding and the pre-wedding ceremonies on social media with adorable captions for each other. Sushmita Sen hasn't posted updates on her Instagram page yet but fan clubs had it covered. Pictures of Sushmita, her boyfriend Rohman Shawl and Sushmita's daughters Renee and Alisah posing with the newlyweds were shared on several fan pages. Sushmita wore an embellished black outfit with red dupatta. Sushmita's elder daughter Renee looked lovely in a red saree while Alisah wore a green outfit.

Sushmita, Renee, Alisah and Rohman positioned themselves around Rajeev and Charu for a happy picture. In other pictures, Sushmita's parents Subhra and Shubeer Sen also joined them.

Here are inside pictures from Rajeev Sen and Charu Asopa's Goa wedding celebrations:

Rajeev Sen and Charu Asopa got married in a civil ceremony on June 7 and they scheduled a three-day wedding gala in Goa for the weekend. Before the wedding, which was held as per Bengali traditions, a combined haldi and mehendi ceremony and a sangeet function were hosted for Rajeev and Charu.

After the wedding ceremony, Rajeev posted a set of pictures from the function and wrote: "Just got married to the person I love and respect from my heart... Sen family." He also shared a photo from their sangeet function and wrote: "We danced our way to a beautiful dream wedding. Charu Sen with Rajeev Sen. Beyond blessed."

Just got married to the person i love & respect from my heart .. Sen family #lifeline #rajakibittu forever

We danced our way to a beautiful dream wedding Charu sen with Rajeev sen . Beyond blessed #rajakibittu

And here's a picture from their engagement ceremony: