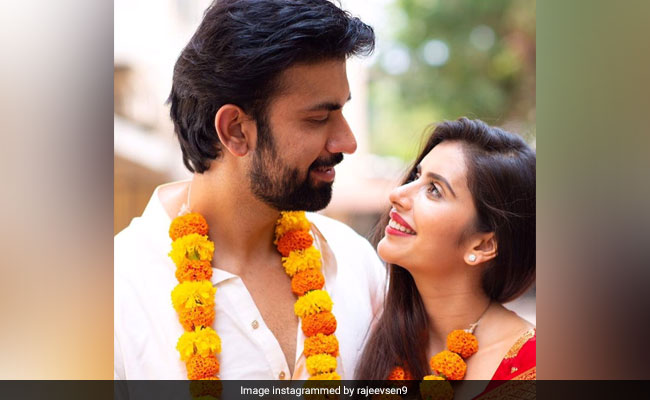 Sushmita Sen's brother Rajeev Sen just dropped in the news that he and Charu Asopa got "lawfully" married. Rajeev Sen even shared a few Instagram stories, which lets us know that the couple had a simple court marriage on June 7. Rajeev Sen and Charu Asopa both shared pictures on their Instagram today. As seen in Rajeev Sen's Instagram stories, the only person who was spotted at the program is Sushmita and Rajeev's mother Subhra Sen. Rajeev wore a simple light coloured kurta and pyjama with a pair of jutti. Charu Asopa wore red saree with very subtle makeup.

Here are the posts shared by Rajeev Sen and Charu Asopa:

The 1994 Miss Universe Sushmita Sen, shared pictures of Rajeev Sen and Charu Asopa, congratulating them after they got engaged in the month of May. The actress often shares family pictures on her Instagram, featuring her daughters - Reene and Alisah, her boyfriend Rohman Shawl and also her brother Rajeev Sen. But she has not shared any update about her brother's wedding yet on her Instagram.

Here is the post she shared earlier after her brother's engagement:

Rajeev Sen and Charu Asopa are dating since the beginning of this year. Rajeev Sen is a model whereas Charu Asopa is a TV actress, who is well known for her roles in Agle Janam Mohe Bitiya Hi Kijo and Mere Angne Mein .